(chapter written in collaboration with Dr Schaffner) .
This physician Swiss anaesthetist demonstrates a particular interest for the rational use of the oxygen in medical and aeronautic use. As confirmed alpine glider pilot (2.700 hours) and co-owner of an ASH-26 E well equipped, he took advantage of his stay in Patagonia to verify in a two-seater and at high altitude some hypotheses that he could not approach by one-seater in Europe. Although this domain is a lot too vast and complex to be treated in depth in this article, the topic has been treated during a previous yearly meeting of the glider pilots aero-physicians (APSV) in Saint Auban. He is also the author of an article many time cited and commented (downloadable on our www.topfly.aero website,) having like topic the systematic under evaluation of the light hypoxia (because legally tolerated) and its multiple dangers in gliding. Heini promised me that he would publish his new findings in a detailed way in a next issue of your favorite magazine.

The experimentations took place with Heini as guinea pig, equipped with his pulsoxymeter to the wrist (Minolta Pulsox 3). its very dish sensor was bandaged on the index and covered by a black glove in order to maintain a good digital microcirculation, required for a good reliability of the displayed values. Every pilot had his own ED-D1 that he adjusted in his way, but the two ED-D1S had to share the flow from only one XCR regulator by cylinder, either the one at the rear of the fuselage (8 litres @ 160 bars) either the one of the baggage compartment (4 l @ 200 bars), the two cylinder capable to be simultaneously open. 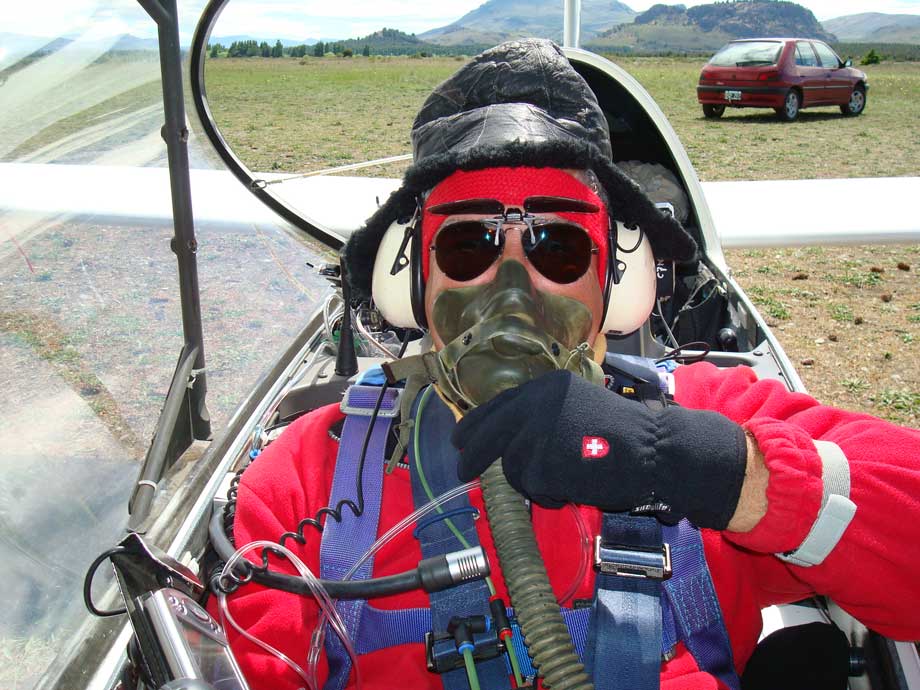 Following the disappointing previous experiences due to the waste of oxygen with various facial masks, the two pilots only used their nasal cannula, even at 8.000 m. However, Heini seized the opportunity to temporarily try his A14 mask that he modified and that he wears over the nasal cannula in order to create an enclosed humid room. Its valve being reversed so that the original entry by the pleated hose became the expiratory part in order to be able to add one to three permeable filters for air but not for the moisture. Although the first goal is the thermal conservation, this device should permit a better oxygenation by the expiratory brake that the three filters in series cause. In addition it should avoid that expired humid air reheated at body temperature can freeze on the canopy.

I therefore take advantage of these lines to transmit you our preliminary findings that you will be able to use for the flights of this summer.

In conclusion the question of the oxygen has a lot more important character than one uses to have, but the popularization of the digital pulsoxymeters is going to permit a better understanding and prevention of the incidents and hypoxic dangers that come with this kind of gliding flights. Gievn the limited reserves in O2 that a glider can carry on board, the EDS offers at present the best way to manage it to the pilots, but its evolution is again far from the perfection.