8/11 – A beautiful beginning of second leg, but the beautiful fruits are not necessarily the best. 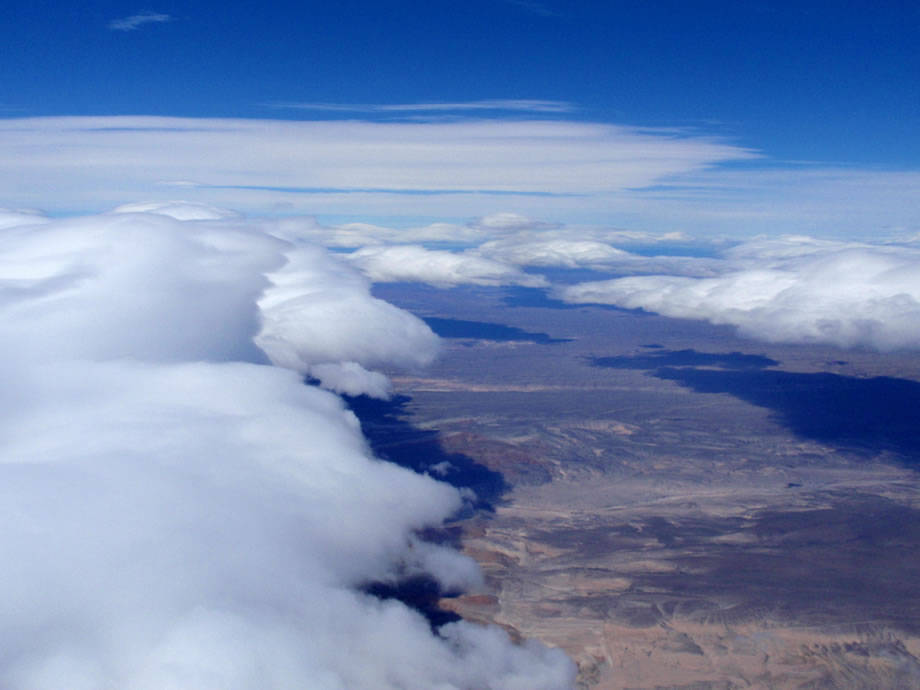 The wind is still strongly southwest, 230 to 240° whereas the orography, actually  mesetas of 500 to 600 m height above the pampa, are oriented exactly north-south. Since the wave system preferentially follows the orientation of the orography respect to  the orientation of wind, we are forced to fly bayonets while endeavouring not to stop but only to slow down and climb during the courses along the wave bars, the loss of altitude between two bayonets being from 800 to 1000 m.
We will have to stop and climb at some time, anyhow. The photo (20) shows the typical sky at that time, remembering that the leading edges of the wave bars are 45° left of our route, and it is therefore necessary to continue to leapfrog from bar to bar. On this photo one can see the materialization of a magnificent hydraulic jump situated about 200 km south but unfortunately too much to the East and unusable. Around  15h20 UTC, it is with great pleasure that I identify the gas station of Paso de Indios, where on December 7th, 2004, I had spent the night in my broken Land-Rover while waiting for the tow truck. Nothing has changed in the village, except that we now know that there is a landable strip south of the pueblo. The leapfrog game and the bayonets end around 17h10 right in the middle of the pampa in the worse place for the wave system since this is the latitude where there is a “hole” in the cordillera, allowing the moist air from the Pacific ocean to penetrate into the pampa without being dried by the compression-expansion process, characteristic of the rebound wave. And as it often happens in this situation, the wind speeds up to 120 km/h, the cloud cover is nearly uniform and lower, with some holes from time to time, no organization of the rebounds, and to crown it all, the cirrus and other high clouds start thickening, making the strato-cumulus layer uniformly grey and therefore hardly “readable”. I am therefore compelled to follow undefined holes at miserable ground speeds, it will take more than one hour and a half to fly these 170 km until the lake Buenos Aires, giving 113 km/h average. During these last three hours, Bruce is in semi lethargy for hypoxia, to the point that he must put the cannula in his mouth so as not to faint. Being too busy by trivial existential problems (only surviving), I was satisfied with only checking that he was always conscious. Once entering  Balmaceda’s TMA (Chilean territory), the conditions appeared more homogeneous (normal, since the cordillera is again continuous) and the visual contact with this beautiful runway allows me to relax a little and to study Bruce’s problem. A change of oxygen cylinders nearly caused him to fall unconscious and didn’t solve the problem. Conclusion: the problem is in its cannula, in fact one opening was completely plugged. These many hours passed in advanced hypoxia will mark him for the rest of the flight and the following day.

As expected, the turn point is completely inaccessible because it is in complete cloud cover, with the mountains inside. This was the risk we had to take in order to complete the triangle within the FAI proportions without going too much to the East at the second point. No worry, we shall use the unlimited sector rule and look for the nearest point in the sector compatibly with the clouds. It is therefore necessary to cross the lake, what was not foreseen. The crossing on the water (40 km) is excellent since I reach the south bank higher than at the leaving on the north one. We enter the sector 22 km south of the turn point and this excess of distance, that for the meantime is penalizing us, will actually be the one that will allow us to get the world record after deduction of the penalty for excess of difference of altitude between the start and the finish. But we will know that only two days later. It is well true that at this level of performance, it is not sufficient to be good, to have the best machine, to be at the right place at the right time, it is further necessary to have a lot of luck. And among all the numerous miseries of this flight, and there will be others, this excess of 22 km flown twice will be our luck. The figure (21) shows the track around this amazing 3rd turn point. 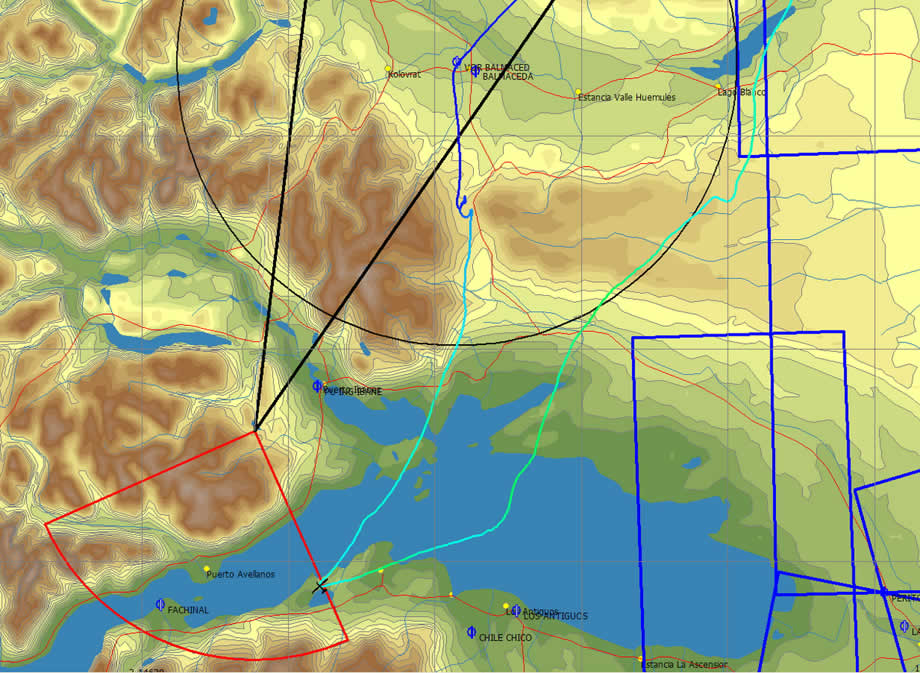