The calculator is unfortunately not programmed for sectors of infinite length. To such  a high distance from the point, the risk to be out sector for few meters is too big and is not a risk worth taking, this is no longer a speed task. I therefore wait to read on the screen of the Zander that the angle to the point passes from 45° to 44°, before turning. The analysis post flight will show that we were 400m inside the sector (22km from the point) and lost 30 seconds. No regret!

The crossing of the lake with 110 km/h tail wind is a question of few minutes, the usual rebounds work well and Puerto Montt Radar (Chile) gives us carte blanche for any  level and heading we require, from Balmaceda TMA to the North, in practice “you are allowed to do what you like, I see you on my screen and I take care of managing the other traffic”. Absolutely magnificent, thank you Chilean ATC’s! We will see three planes passing underneath and nearby without any problem. Northbound, we only see white (or rather grey) low cloud cover (Sc), it seems to be 8/8. The higher level cloud cover (Cirrus) lets  only some filtered light through and we make a complete refuelling up to 7.500 m above Balmaceda airport.

From this moment the flight is merely playing tag in search of minuscule holes, every hole being in fact the materialization of a climb. During 2 hours and 275 km, we will only see a grey carpet, which is not a worry insofar as the electronics (two iPaq’s with  SeeYou Mobile) perfectly visualizes the terrain, all the landable airstrips being downwind on the pampa and therefore always reachable with somehow clearer sky.
In my opinion, we flew far too much inside the mountains, and if I had been alone on board I would have flown at least 50 km more to the East. But it was necessary for  Bruce to restart living after his long hypoxic episode! But at 21h50 and “only” 4800 m, my tolerance did reach the end and is it with a certain hindrance that I asked him to escape downwind toward a well formed hole, even though we could see another nice energy line ten kilometres headwind, which would have meant losing again at least 800 m. We shall never know which one was the best decision, but in any case my one was a good one since we had again visual contact with the ground in an easy rebound that propelled us up to 6.700 m in a quarter of hour.

We now fly above known land with 6/8 of Sc in reduction northbound, and below 8/8 of cirrus and other stratified clouds whose density intensifies (see photo satellite 22 with our position). My optimism is however mitigated by the fact that the wind turned 40° to the north, increasing the headwind component whereas it should have been tailwind in the last leg. And it will even turn more to the north, reaching 290° during the final glide. It is 22h15 UTC, we are at km 300 with 2h30 flyable, we still can make it.

We are 25 km East of the ideal energy line, it will therefore be necessary to make at least two bayonets headwind before reaching Esquel, at the cost of 2.000 m. I knew that this was the price to pay but I didn’t know that there was no carrot at the end of the stick! Indeed, the wave bars are disappearing, the Vz netto are measly (approx. 2 m/s against usually more than 5 m/s) and I hardly gain 900 m while flying the best 30 km of the whole region, downwind of Cordon de Esquel. And I start making a series of  mistakes. The first one being not to stop few minutes where the climb was the best. This  decision has been taken on the basis of the METAR of Bariloche that gave 20 kt of wind. Nothing let me imagine zero wind two hours later! I leave the km 200 at only 5.500 m with the finish line at 2.500 m. It is the beginning of a slow agony, of a coming down to the hell that is going to last 1h30 without any possibility to stop because constrained to maintain a ground speed of 150 km/h, in the desperate search of signs of unlikely and ephemeral rebounds, fleeing under a ceiling of cirrus and alto cumulus falling down whose barbules skim us around 4.500 m, the wind having turned to 285-290° and dying quickly since it is only 50 km/h at 3.300 m abeam Bariloche Int’l airport, whereas the tower announces “wind calm”. I can’t believe that, I ask to repeat the information. We were very down hearted. The long discussions with Bruce during these 200 km with continuous calculations of the ground speed to be maintained and other options let the place to an unreal silence. Quite a small hope rises again in the neighbourhood of the finish line because the wind turns back to the southwest, 240° for 40-50 km/h. But alas it is only a valley effect, not the least start will wake up our variometer and I approach the finish line 1.200 m below the altitude of departure, sick at heart, exhausted. The sun was already down and the thick layer of high clouds absorbs the few remaining rays of natural light, making the reading of the instruments more and more difficult. We try the head lights but the light is too strong and we don’t see the nearby mountains sufficiently well. At that instant Bruce extracts me out of my torpor while shouting me to pull up to stall in order to gain a few hundreds of meters. I ignore why but during these about ten seconds distraction to debate this point with him, I let the glider deviate about ten degrees to the left and I miss the finish line for about one hundred meters and I only had to go for a U turn to cross the line but 200 m lower, which will cost 20 km penalty, and a world record. The figure (23) shows the incredible bunch of spaghettis around the start (green) and the finish (in yellow), with three starts, two of which being in the opposite direction from plan and two finishes, one of which being in the reverse direction. Difficult to make worse! 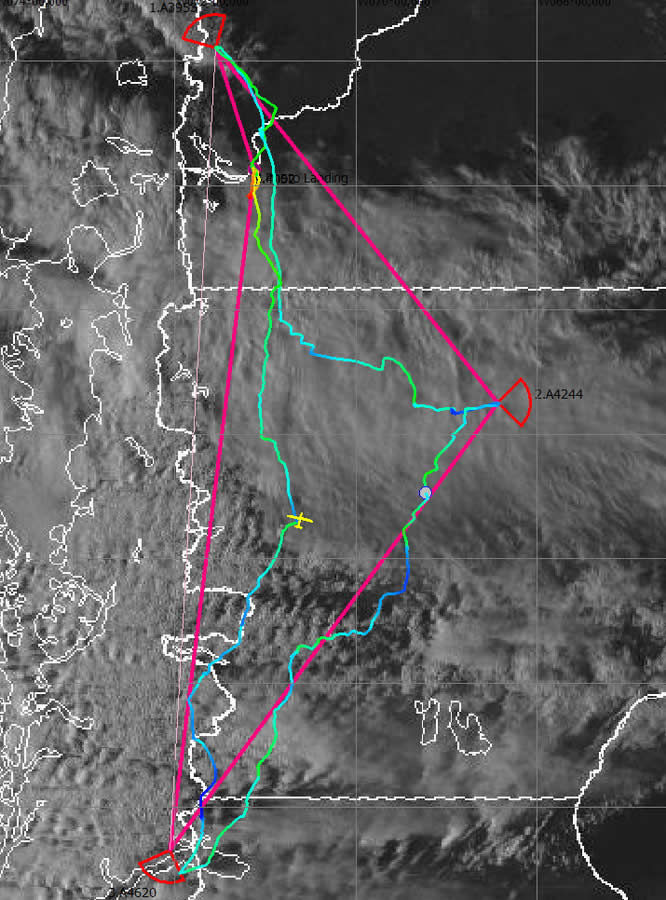 We have 18 minutes of light to fly the 25 km to the landing, and the nice lady in the TWR allows us to land at the aero-club upon my guarantee to be landed within the next 10 minutes, otherwise we would have to divert to the illuminated runway at the international airport, an other 10 km farer. It is whereas we hear John Williams, back from his 2.000 km badge attempt, announcing right behind us guided by my  navigation tail light.

← 10/11 - The absolute void exists, I met it 8/11 - A beautiful beginning of second leg, but the beautiful fruits are not necessarily the best. →