The first natural, and certainly the most meaningful, phenomenon was the eruption of the Chilean volcano Puyehue-Cordon del Caulle, situated 100 km NW of Bariloche, last June 4th, 2011. Photos, taken about 30 km away from the crater, give an idea of the size of the cataclysm. The immediate consequence for Bariloche was a solid rain that covered the city and the lake with 12 inches of sand and pumice stone, because, unfortunately, that day the wind was blowing right in the axis of the volcano (310°).

After nearly 4000 people had been evacuated, normal life stopped completely for several weeks along hundreds of kilometres towards the East, the majority of the wild life died and thousands of bovines and sheep had to be euthanized because they were deprived of food and unable to eat the fodder that the farmers brought to them, because, never having seen it before, they did not know what it was!
Some days after the explosion, the volcano started spitting very fine, impalpable ashes (as light as icing sugar) sowing this thick, deadly powder along its plume that turned according to the will of the wind and falling to earth along a cone of 90° angle having its bisector oriented precisely W-E and whose edges were, unfortunately, the airports of Bariloche and San Martin de Los Andes, with, as a consequence, the inactivity of one or the other, and the impossibility of flying below 3000m along the 100km that separates these two airports. 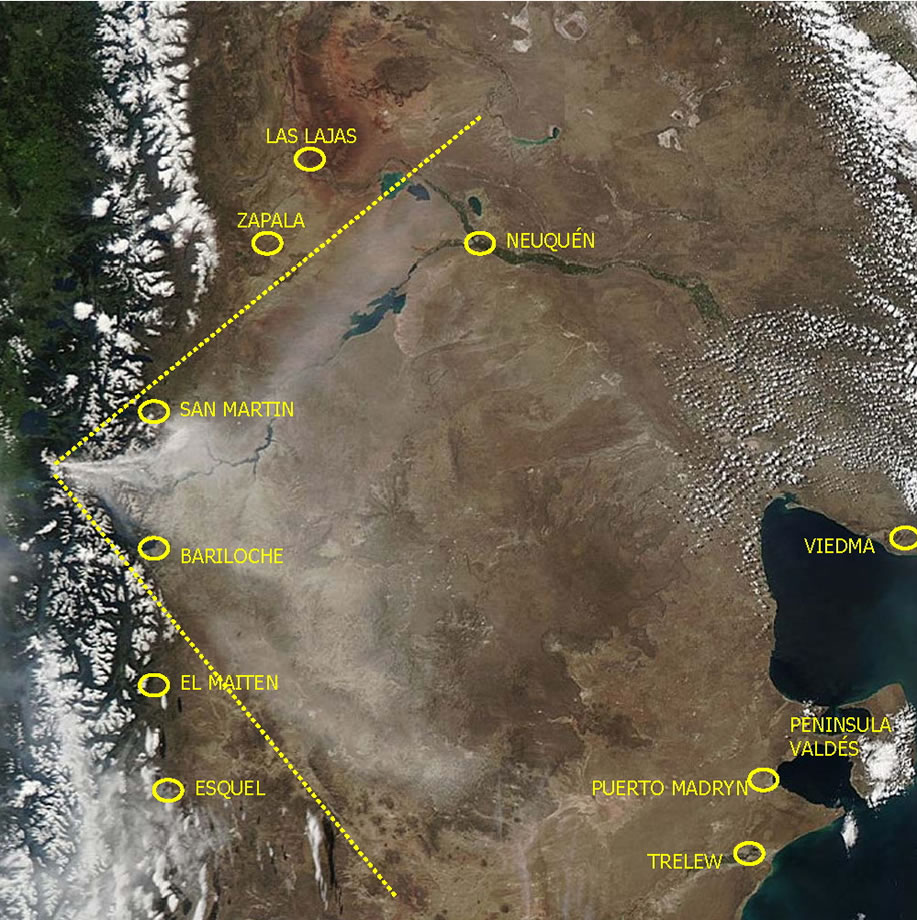 The city of Bariloche remained paralyzed for more than a week, the time for the shovels to clean the streets. The hangar stayed safe, on the one hand because of its shape and, on the other, thanks to the fast intervention of club members while taking big risks.

The runway remained unusable for four months, the time for rain and snow to make the dust penetrate the soil and for the wind to displace the rest eastward up to Buenos Aires (1600 km), where the airports had to for close several days, like those of South Africa, Australia and New Zealand.

Bariloche’s international airport remained closed from June 4th and only officially reopened on December 20th, while taking advantage of this forced stop to change the asphalt of the runway and add a water cleaning system in order to wash away the ashes deposited on the asphalt. In fact, commercial flights would only recommence at the end of January, and again with numerous interruptions each time the plume passed above the city. For the record, an airline jet remained trapped for several months on the tarmac.
The pilot had received clearance to take off but the controller did not realize that the cloud that was arriving over the city and the lake was, actually, a cloud of sand and ashes, which invested the plane during the initial roll out, obliging the pilot to abort the takeoff. The controller had not been informed about the eruption of the volcano!
From the point of view of the ground handling around the parking and club runway, the situation was not brilliant because the whole area of the gliding club was completely protected from the wind, preventing it from blowing the five inches of ashes away toward Buenos Aires! It was, therefore, necessary to live under these hard conditions, the feet in the ashes and, often, wearing a face mask, forced to go straight under the shower every day when back home.

Under the ashes, waiting for better times
Of course, you will say “But why the hell did you go there, knowing the situation? “ After long reflection, and consultations with the German team, we decided to go based upon the facts that, on the one hand, no eruption of the neighbouring volcanoes (Llaima and Chaiten in 2008) had lasted more than three months and, on the other hand, the area of influence of the plume had completely spared the neighbouring airports of (B) El Maiten (100 km south), (C) Esquel (200 km south), (D) Zapala (250 km north) so we could have moved the camp there if necessary. Actually, none of the plans B, C or D could be applied. For (A), the runway of El Maiten was too soft to allow the Nimbus to take off with two pilots, which forced me to abandon my passenger on the ground to return by bus, in his flight suit designed for -30°C but with +25° on the ground and not a single penny in his pocket!

For (B), Esquel turned out to be practically QGO because the local ATC suddenly passed from one airplane per week to four per day (partially replacing Bariloche), so big panic! To the point that the Swiss, Jean-Marc Perrin (DG 800) and the U.S. Perlan Project team (DG 1000) had to abandon this solution after a few days because they had to take off before the airport opened and land after it closed, while prohibited from flying in half of the TMA, the good one, where the wave stays. 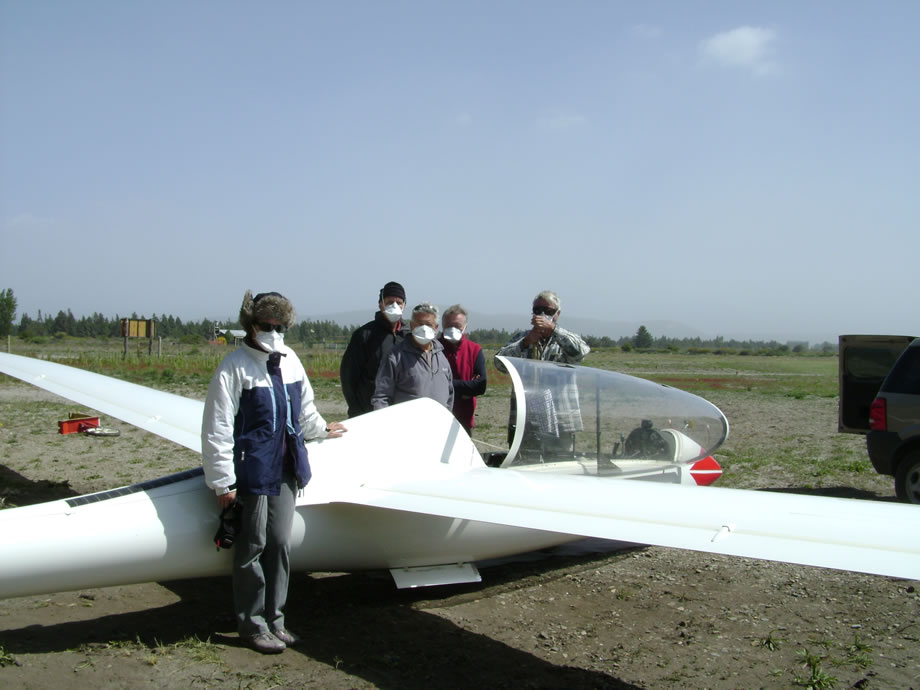 Under the ashes, waiting for better times

The plan (D), moving to Zapala, could never be applied because of the abnormally South position of the Pacific anticyclone, so that the meteorological conditions were never favourable for more than one day at this latitude, thus eliminating any interest for a move that would mean losing two days and a lot of money. On the contrary, it would have been wiser to move the camp at least 300 km south, which proved impossible because of the absence of infrastructures and logistics compatible with the transportation of one container and the operating contingencies of the Nimbus 4DM, unable to taxi with it’s sole engine. Jean-Marc Perrin, coming from Switzerland with his own car, trailer and the DG 800 in 15 m, could therefore take advantage of these precarious runways and thus log flights between1500 and 2000 km, thus allowing him to win the OLC 2011.
← 3/5 - Gliding and volcanic ash 1/5 - Patagonia 2011-2012 →