6/20 IF DANTE HAD KNOWN CALAMA, HELL WOULD BE LARGER AND A LITTLE MORE MISERABLE.

We will therefore go from heaven to hell by choosing Calama, whose public airport is completely secure, 1,450 flights in November and the agreement of the DGAC (national FAA) to practice our activity there for a month with a permanent clearance to FL240. Little surprise: there is no AVGAS, we will have to drive 300 km to fill the cans. 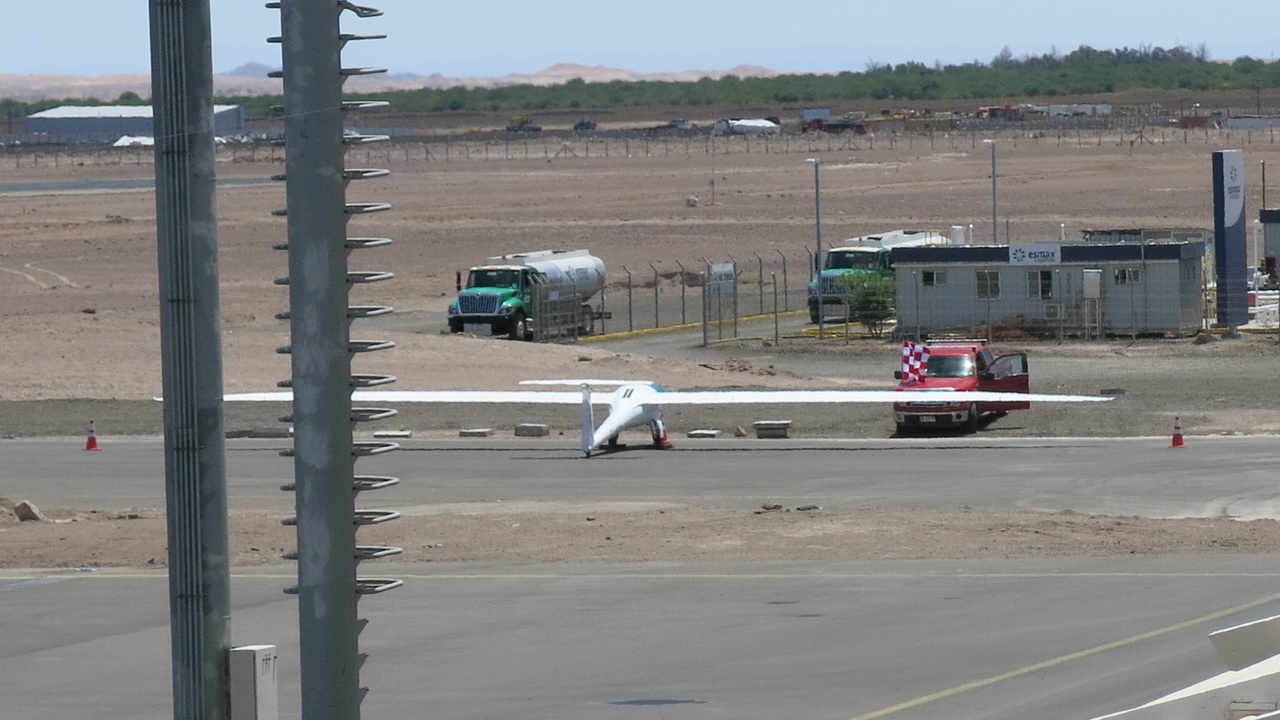 Our parking place is located right in front of the fuel depot, but there is no AVGAS. Forced to drive 300 km by car with canisters, which must then be brought into the airport’s secure compound. Why this engine did not give full throttle with the MOGAS Super 98, it will remain a mystery to me. Jean-Pierre’s 4×4 van “camioneta”, is visible in front of the glider. It helped us a lot. 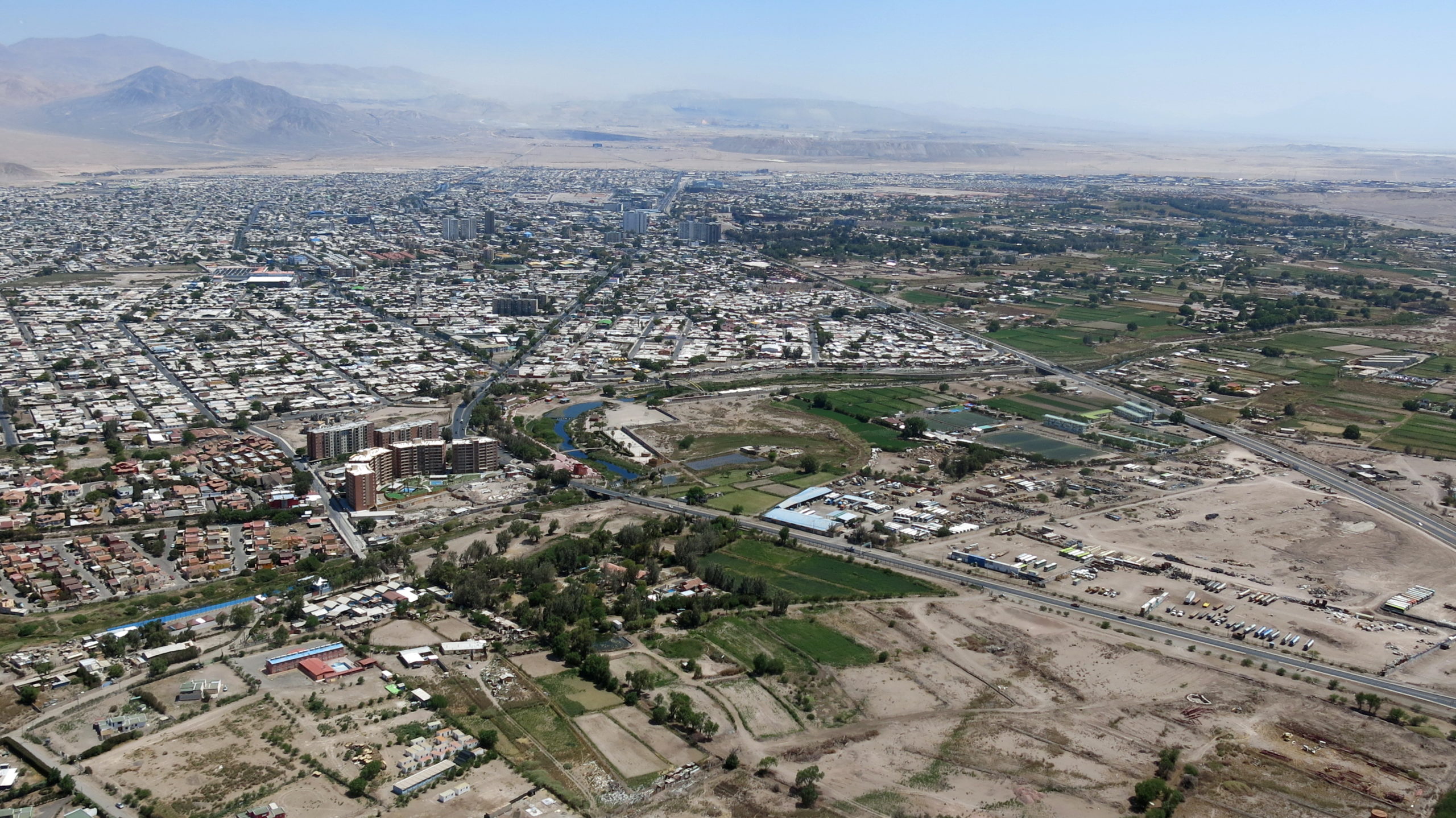 View of the city right after takeoff, before turning North. We lived in the center, 10 minutes from the airport. Note the greenery west of the Rio El Loa. Outside, only desert and mines.

As an oasis, Calama has always been a must go for the Atacamene and the Incas, then the Spanish. Saltpeter, the main component of black powder and fertilizers, was for centuries the main wealth of Chile, and the starting point of the Pacific War (1879) which led to the loss of access to the sea by Bolivia (Antofagasta) and the loss of Arica for Peru. The tension between the two countries is constant, Bolivia does not have an embassy in Chile, and my Chilean pilots were terrified of having to put their wings in Bolivian territory to climb in wave. The exploitation of saltpeter has been completely abandoned (ghost towns that can be visited), a wealth that has now been replaced by lithium. Metallurgy has always been exploited by the oldest populations to extract copper, gold and silver. The main interest is the presence of the Rio El Loa, flowing to the sea while the other rivers get lost in the desert. Water and salt are fundamental resources in metallurgy. 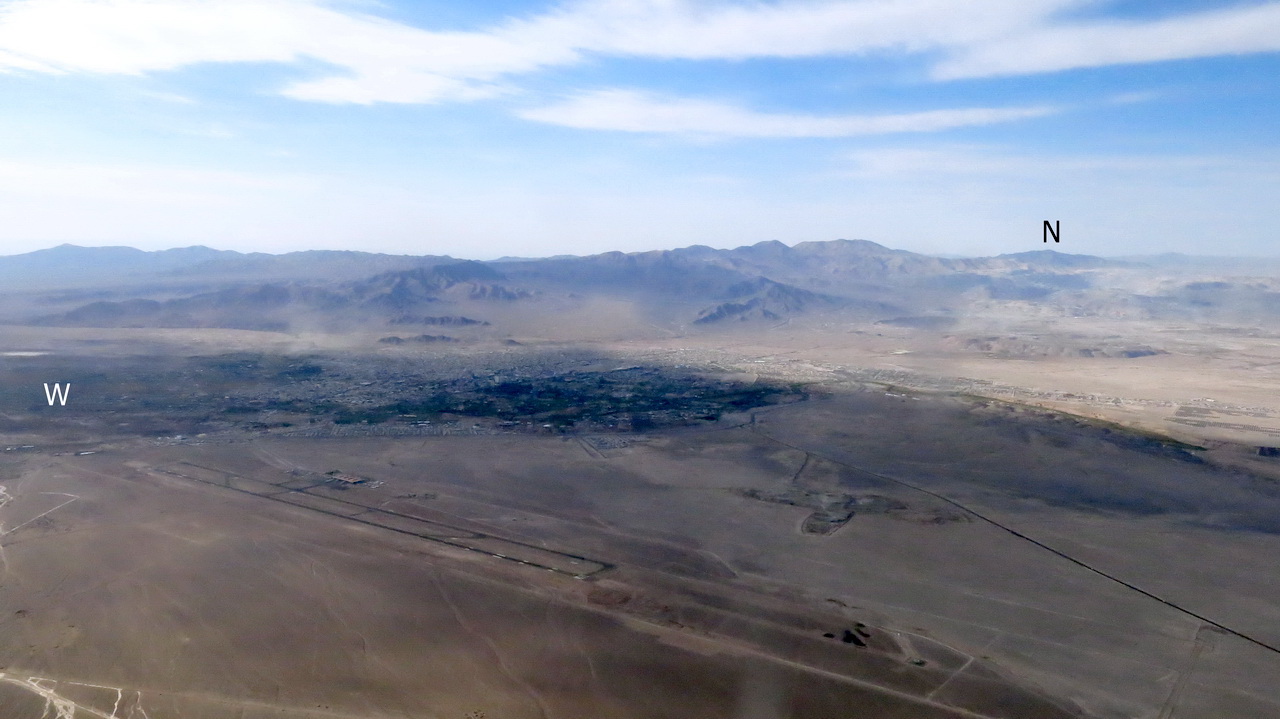 The oasis town of Calama, 150,000 inhabitants and its international airport. The entire mountain range to the north of the city is a gigantic open copper mine that floods the city with dust, especially during the night with the downward breeze. Calama has in particular that it has never really rained, making it one of the driest places in the world with an average annual rainfall of 5 mm. The underground is full of water which gives this impression of greenery, totally artificial. 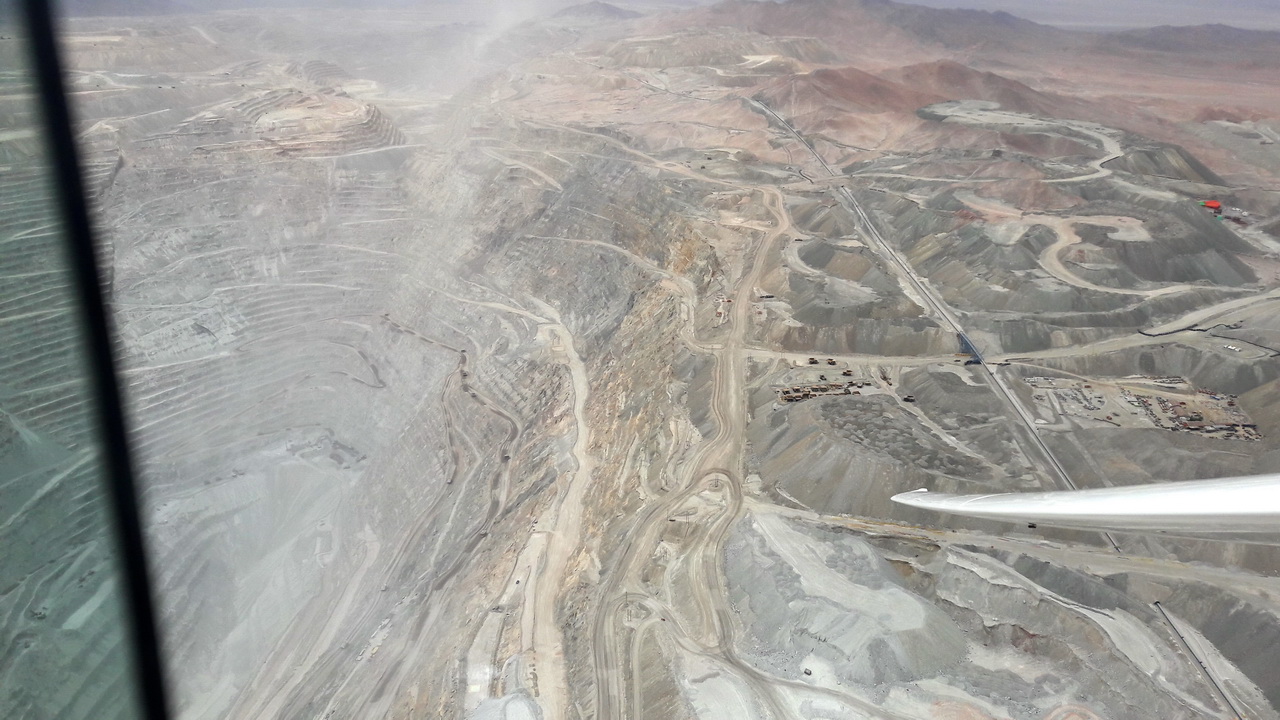 This hole is 1,200 m deep. The ore is extracted by blasting the walls, which generates this infernal dust. 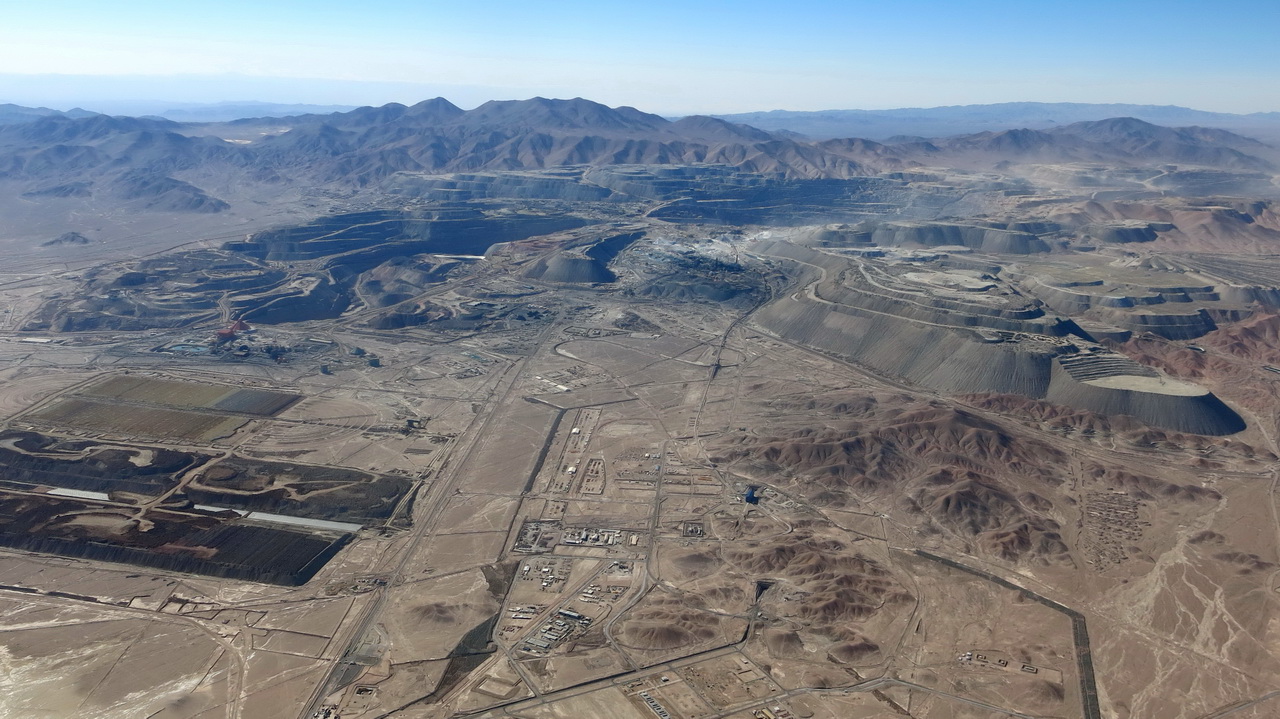 The entire mining plant. The workers village, 8,500 inhabitants, had to be closed due to air pollution and its population moved to the town.

Were the permanent haunt of my wife, especially after that of November 29, magnitude 4.8. In the middle of the night, the bed starts to swing, banging against the wall, and that’s what woke me up. Time to say “I’m still alive, it’s over, so I’m going to sleep again”. In fact, I was not too worried because we lived in a recent building built to earthquake-resistant standards. Certainly, the higher you are, the more impressive it is, we were on the 7th floor. I then understood why most of the windows were cracked.

Below magnitude 6, Chileans do not even pay attention, they call it a “tremblor“, a tremor, without any consequences. Above, it is a “terremoto“, an earthquake, there can be destruction, or worse, tsunamis, like that of 2010 in Concepción of magnitude 8.8, causing 525 victims and 2 million victims, the sea ​​having swept half of the city. During my 2016 expedition, we had to stay in this city, the wounds of which were still clearly visible. We stayed in the 10th floor of the Ibis hotel, and we experienced a magnitude 6 “tremblor”. In the corridors, there were had only strangers, the Chileans hadn’t even gotten out of their beds. I had already adopted this attitude in Calama.

After the Calama earthquake, we downloaded an application that informed us of all the seismic activities around, it was hell, there were everywhere, every day. I quickly uninstalled it, it was useless, permanent stress and anyway, when you know, it’s too late.
Besides, how can you imagine going to live in the middle of the largest range of volcanoes in the world, many of which are active, at the edge of the ocean trench, along the subduction line, where the Nazca plate is pushing these volcanoes up by sinking at the rate of 8 cm per year under the South American continent, without suffering some inconvenience?

Chile has not stopped moving.

In coastal cities, tsunami evacuation routes are posted on every street corner. We are in Caldera, a compulsory stopover halfway between Santiago and Calama. It is the gateway to the Atacama Desert. 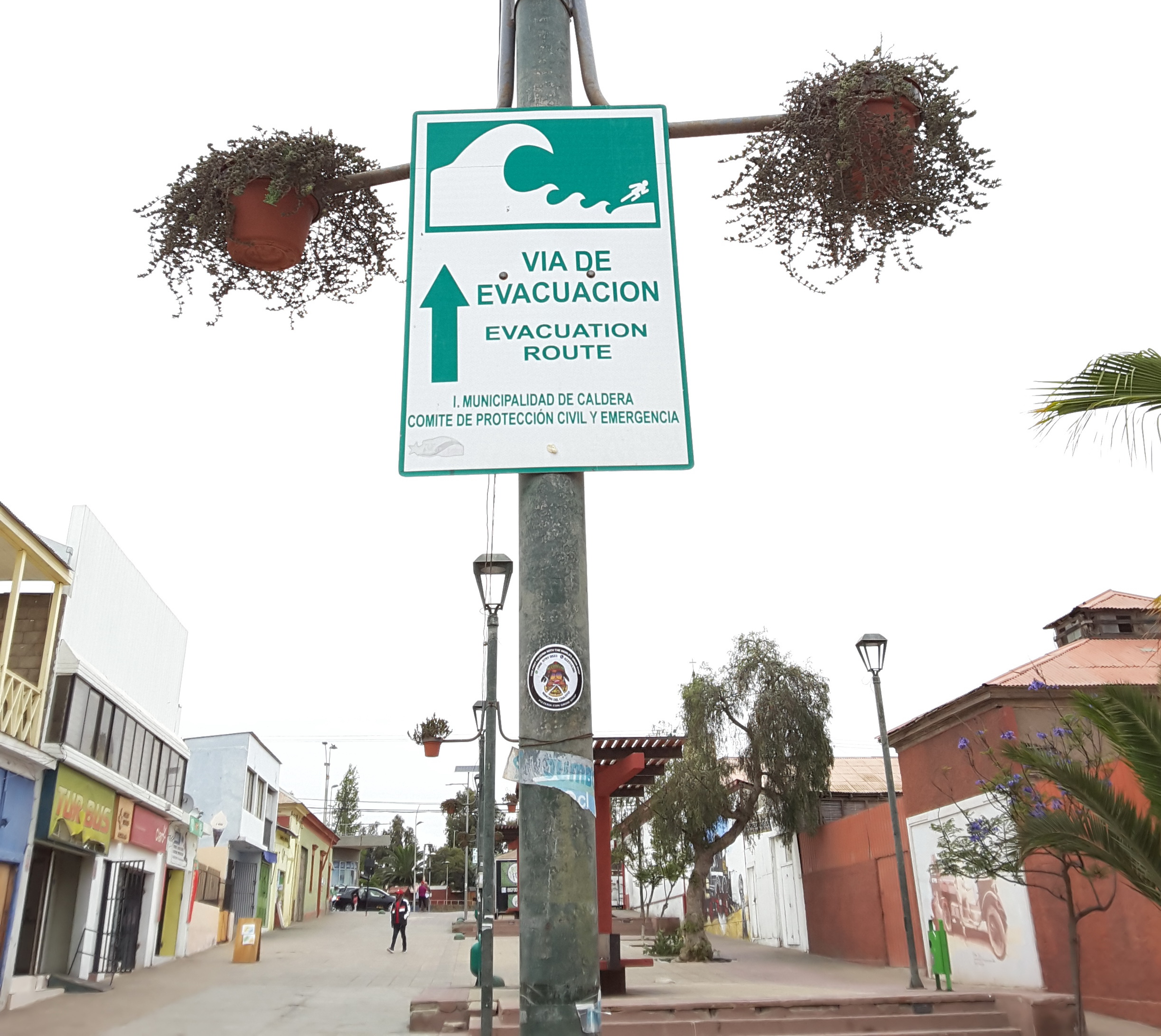 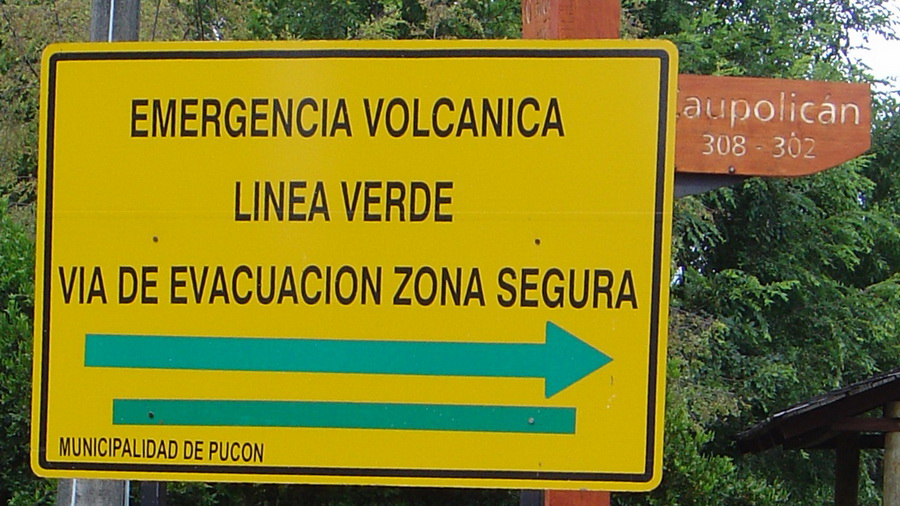 Even inside the country, everything is ready for evacuation. The volcano Villarica exploded in March 2015, projecting flames and stones at very high altitudes. We have overflown and photographed it many times to observe the red magma lake in the center of the crater. 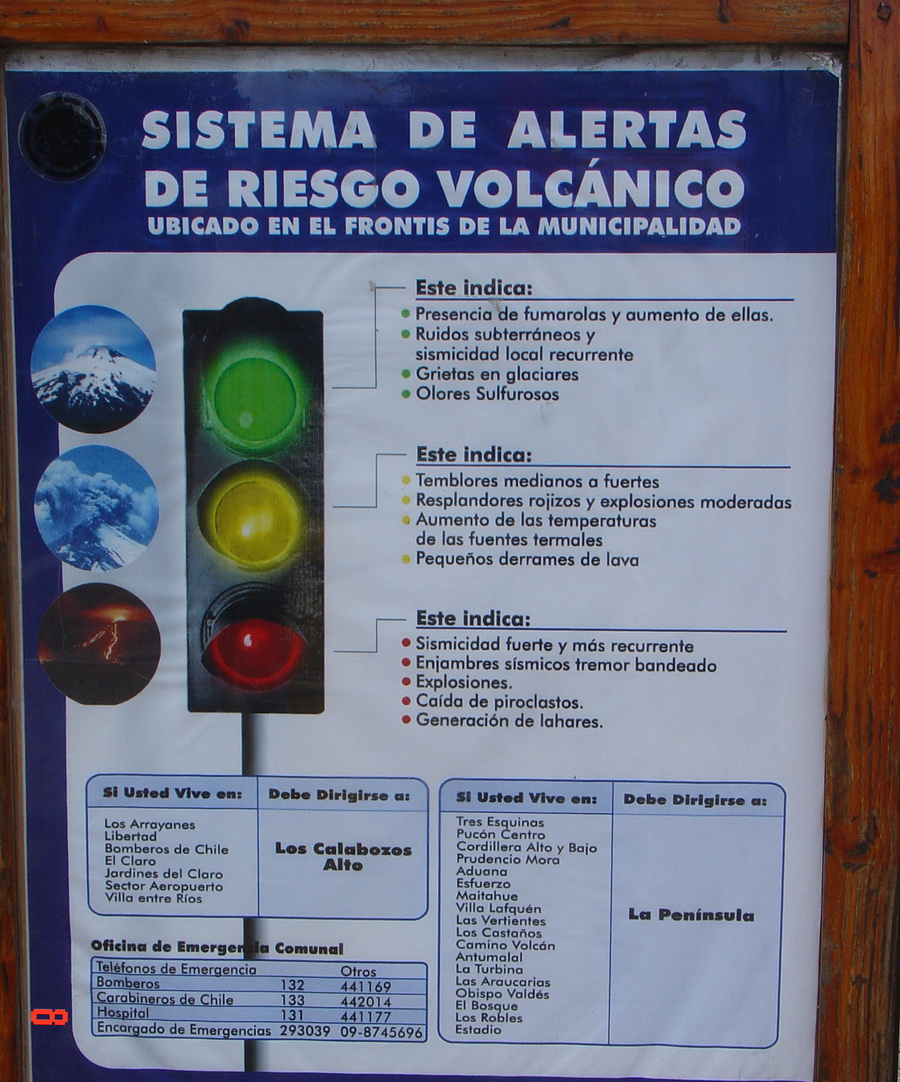 The crater of the Villarica volcano in November 2004. Photo Claus Dieter Zink.