The Atacama Desert stretches for about 1,000 km in length and 200 to 300 km in width, between the Cordillera de la Costa and the Cordillera de Domeyko (see section below) but the tourist area around ​​the famous volcanoes covers around 500 km long and less than 100 km wide, part of which is in Bolivian and Argentinean territories.

The structure of the Andean Cordillera at this latitude (22 °S) is totally different from that which we know between Mendoza (33 °S) and El Calafate (50 °S). It is a plateau, “Altiplano“, whose altitude varies between 4,000 and 5,000 m, on which stand a large number of isolated volcanoes peaking between 6,000 and almost 7,000 m, either showing the pure conical shape, the strato-volcano, or more complex, composed of several more or less attached volcanoes, forming a small ange of a few tens of kilometers long. Between these spectacular cones planted in the driest desert in the world, there are a multitude of lakes, or lagoons, (lagunas) either of fresh water, where life begins again (in particular around 4 000m) either salted or dried up, lifeless, a palette of colors unique in the world. These ranges become a more continuous cordillera while going towards the south, towards Santiago, exploitable then in thermodynamics, but especially in wave on the Argentinean side, prohibited for us because of lack of Third Party Liabilty insurance of the Chilean gliders.

The Domeyko range came out of the ground much later, “only” 50 million years ago, and has not been the subject of any volcanic activity. It is the seat of most mining activities in the country, the reaction to the sunshine is quite similar to that of our Alps.

The Atacama “Salar” is the result of the evaporation of an inland sea only 5000 years ago, during an extraordinarily hot period. To the point that moisture is still present under the salt crust, easy to break with the foot. With many heavily salted lakes that delight flamingos and tourists in search of strong emotions.

The Atacama Desert, wedged between the Domeyko and coastal ranges, has very little thermal activity as it is influenced by the cold air from the Pacific ocean, cooled by the Humboldt stream. In the middle of summer, the water temperature hardly reaches 16 °C. The sea breeze blows every day 15 to 30 kt from 10 am to 10 pm, and like the desert is only 100 km from the sea, bye bye thermals!

The center of gravity of this range is located around the Atacama Salar, better known as the oasis village of San Pedro de Atacama, located at 2,400 m AMSL. San Pedro is the tourist reference of this whole region, the city is managed autonomously by an indigenous Atacamene community which has set the goal of preserving all the original characteristics of the village, which was part of the path of the Incas from Peru, then occupied by the Spanish in 1540, who built this village in colonial style perfectly preserved. A little gem of which all houses, including international hotels, are strictly on one level, walls constructed of “adobe“, a mixture of clay, water and a small quantity of chopped straw, shaped into bricks dried in the sun, (photo) and roofs covered with straw and mud. Acceptable technique in this country where it rains only one day a year, and not every year. 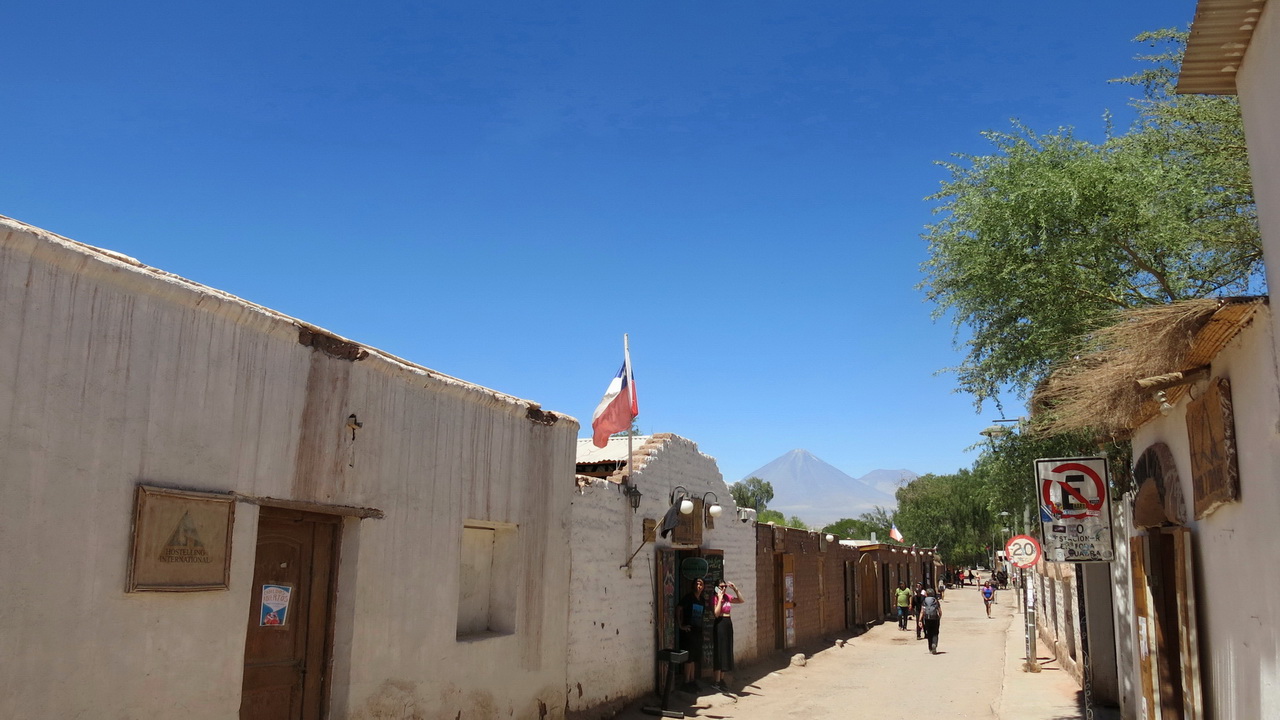 The tourist tours around San Pedro are innumerable, ranging from climbs on volcanoes (all around 6,000 m), to mountain bike circuits in the Salar lagoons or those at altitude at the foot of the Miscanti and Miñiques volcanoes. Do not miss also the excursions in the Moon Valley, a world of pure salt and gypsum devoid of any form of life, the Death Valley, the geysers of Tatio where the water comes out at 86 °C, the boiling temperature at this altitude (4,350 m), baths in salt lakes as in the Dead Sea, numerous Salars, abandoned saltpeter mines, and many other tourist places, as far as Bolivia or Argentina. In short, San Pedro would have been the ideal base for a gliding-tourist expedition, a little paradise, if the beautiful 2 km asphalt runway was not open to all winds, totally devoid of any infrastructure and any form of security. This last point was of particular importance in this period of social unrest. 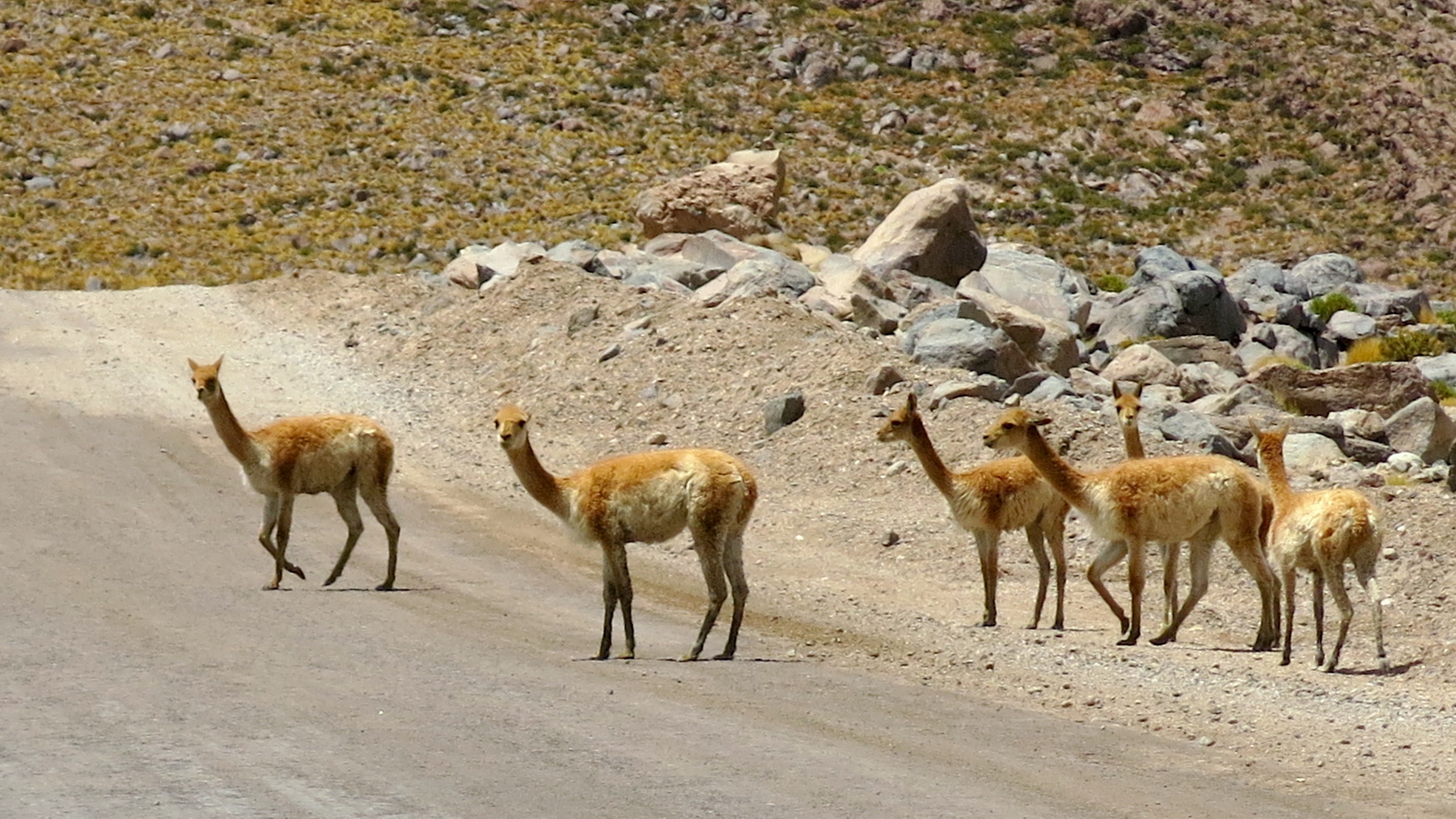 The vicuñas are not shy, and have priority. Not to be confused with guanacos, but both are camelids. 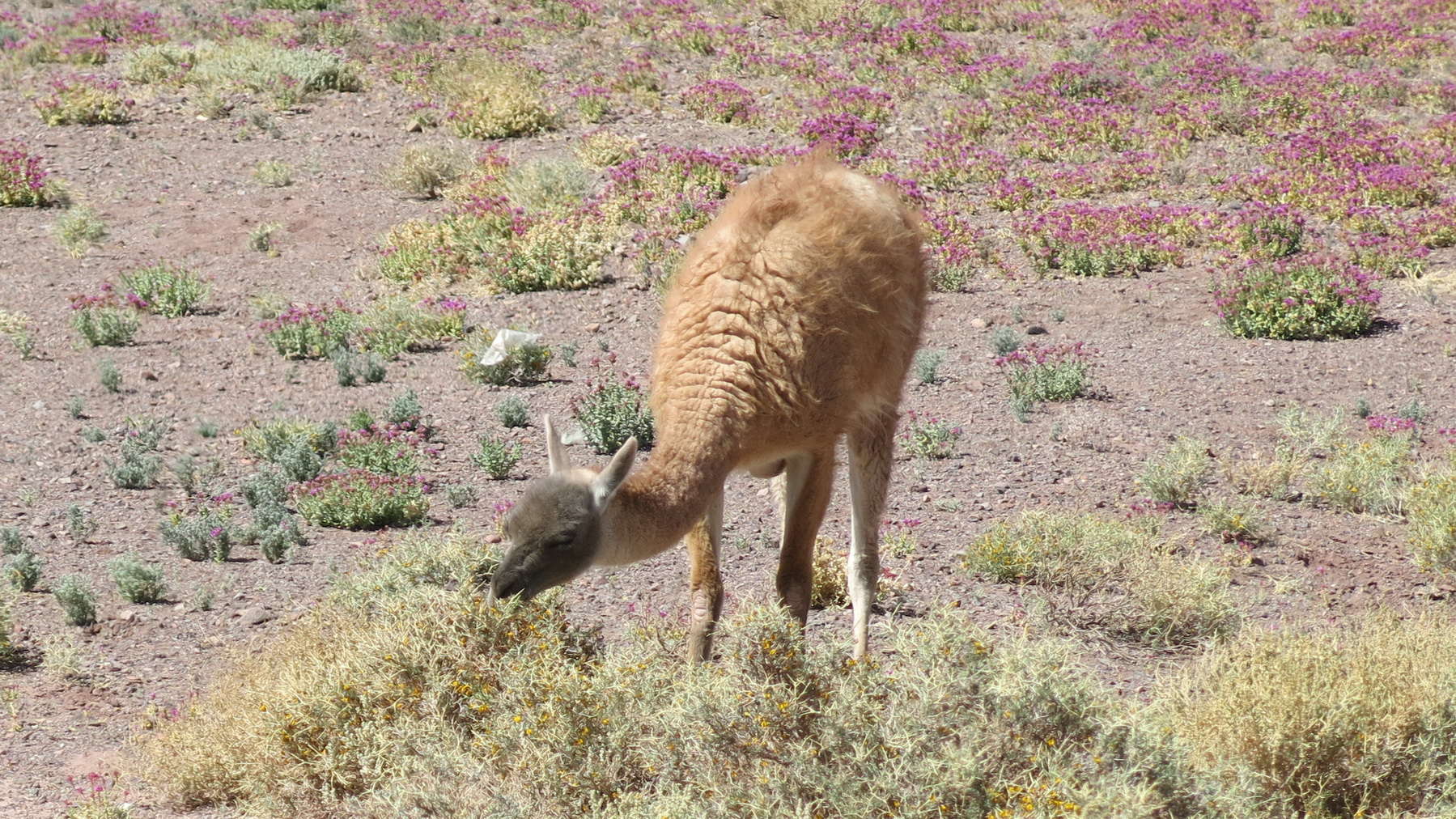 This is a quite familiar guanaco. Note the presence of thousands of small flowers that came out overnight after a light rain. We are at col Paso Barros Arana, 3,400 m AMSL, 30 km fom San Pedro. 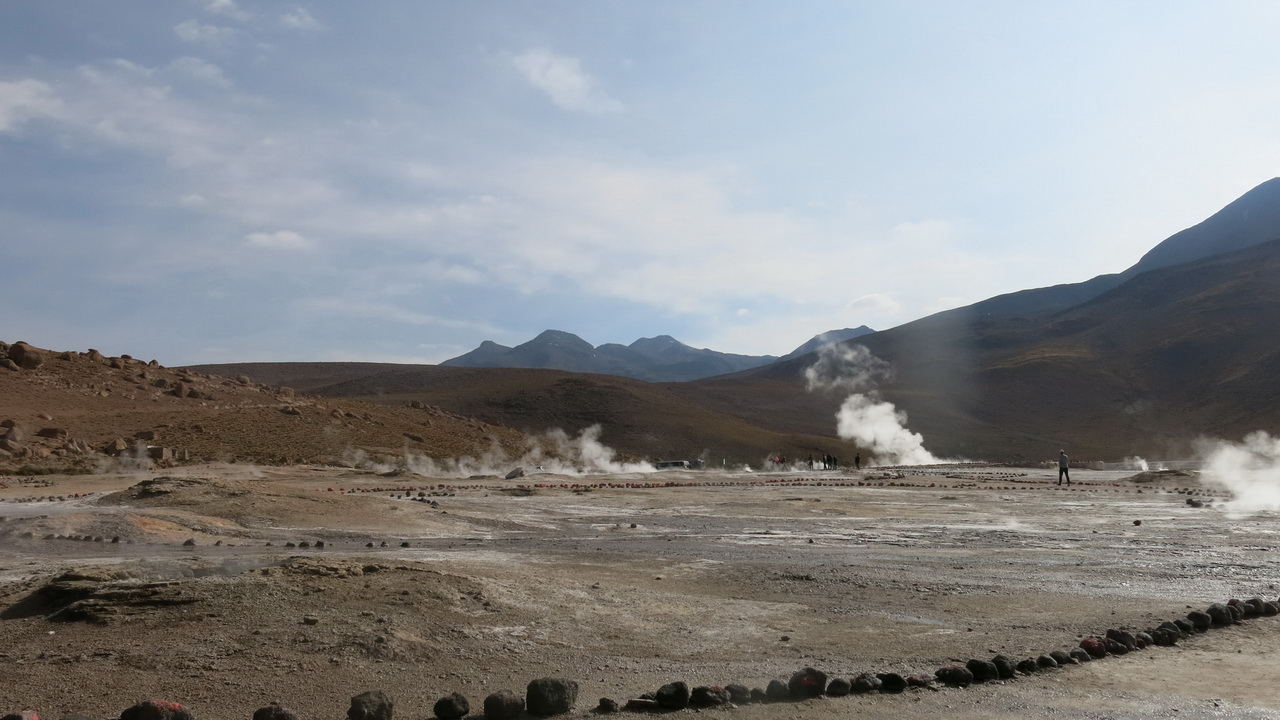 The Tatio geysers, altitude 4,300 m, with the possibility to swim in natural pools. The temperature of the water depends on how far you are from the incoming stream, which is at 86 °C. 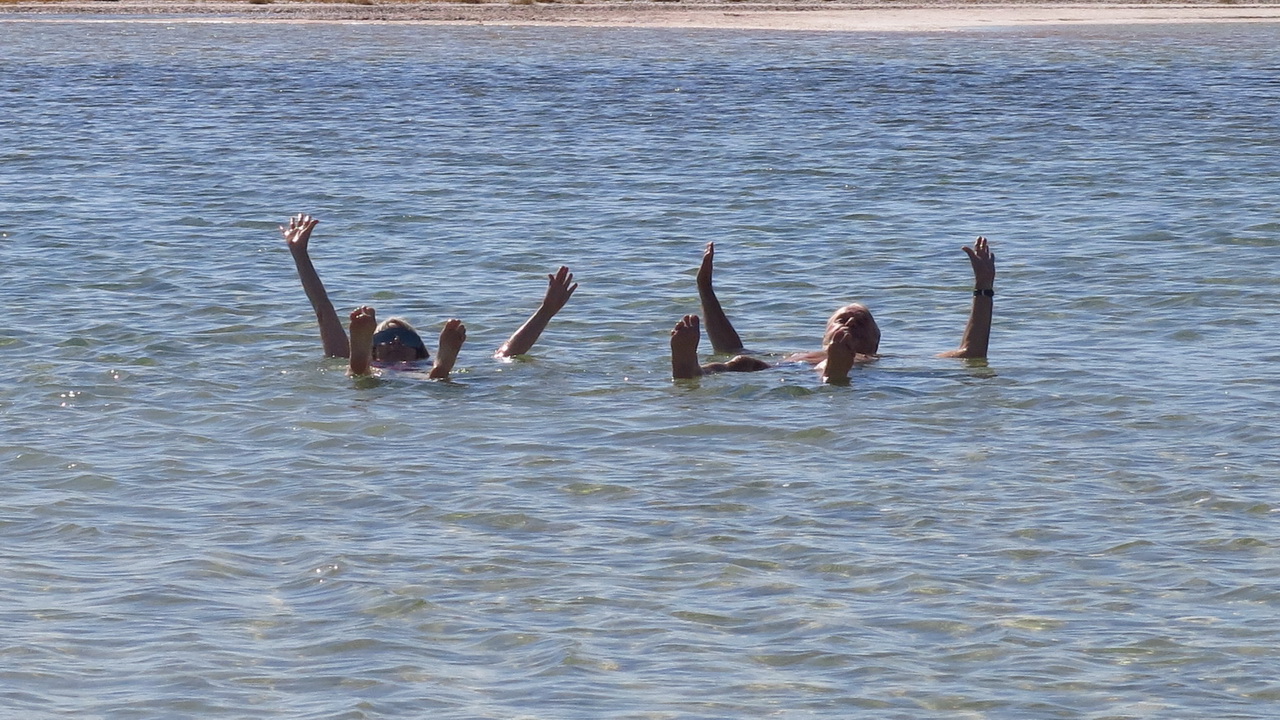 Swimming in the Cejar salt lagoon, in the Atacama salar. Limited to 15 minutes so as not to contaminate the environment, cold shower without soap limited to 5 minutes. No worries, we are at the tropics! 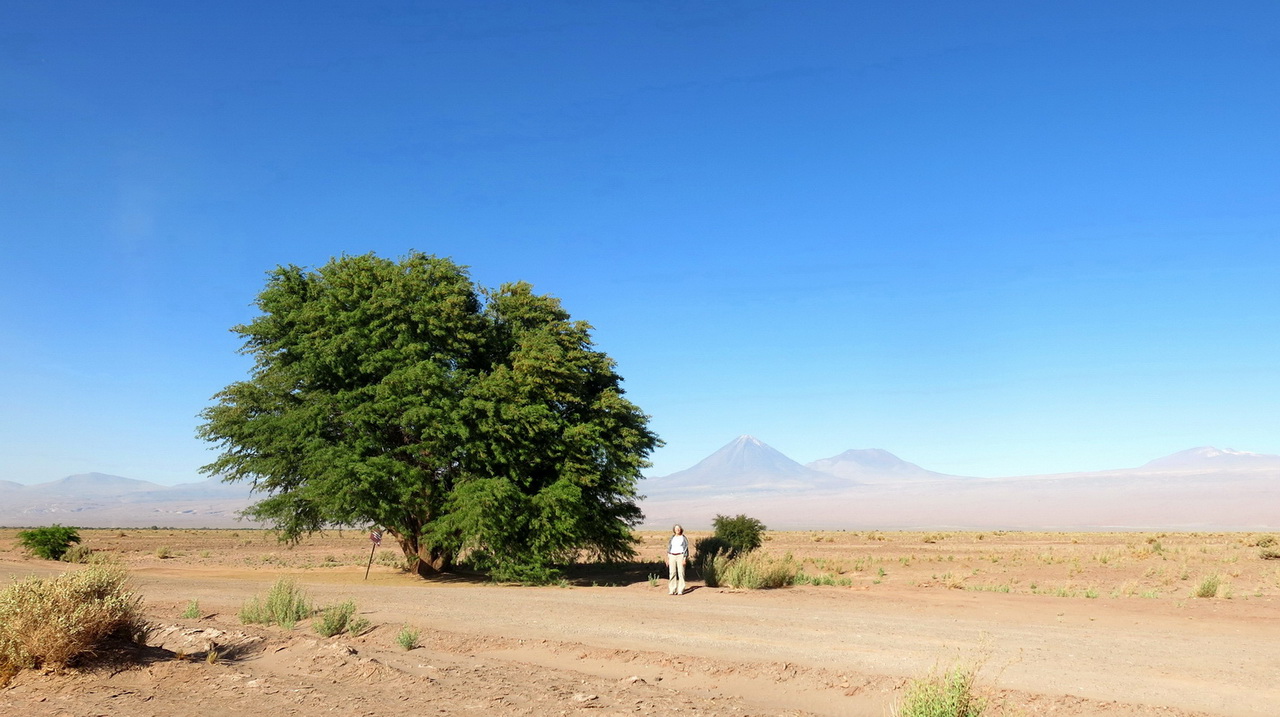 The best proof of the presence of water in the middle of the Atacama Salar, this splendid false pepper tree is in perfect health. In the background, the mythical volcano Licancabur, which will be our starting point for practically every flight. On its right the Juriques volcano, then the col Paso de Jama (4,400 m) which leads to Jujuy in Argentina. The altitude and the temperature make the trucks drivers prefer to wait for the coolness of the night to cross it.

The Puritama thermal baths, 3,500 m, swimming at the outlet of the source at 36 °C in the middle of the volcanoes 30 minutes from San Pedro. The site has been developed for tourism since it belongs to the multinational hotel group Explora. 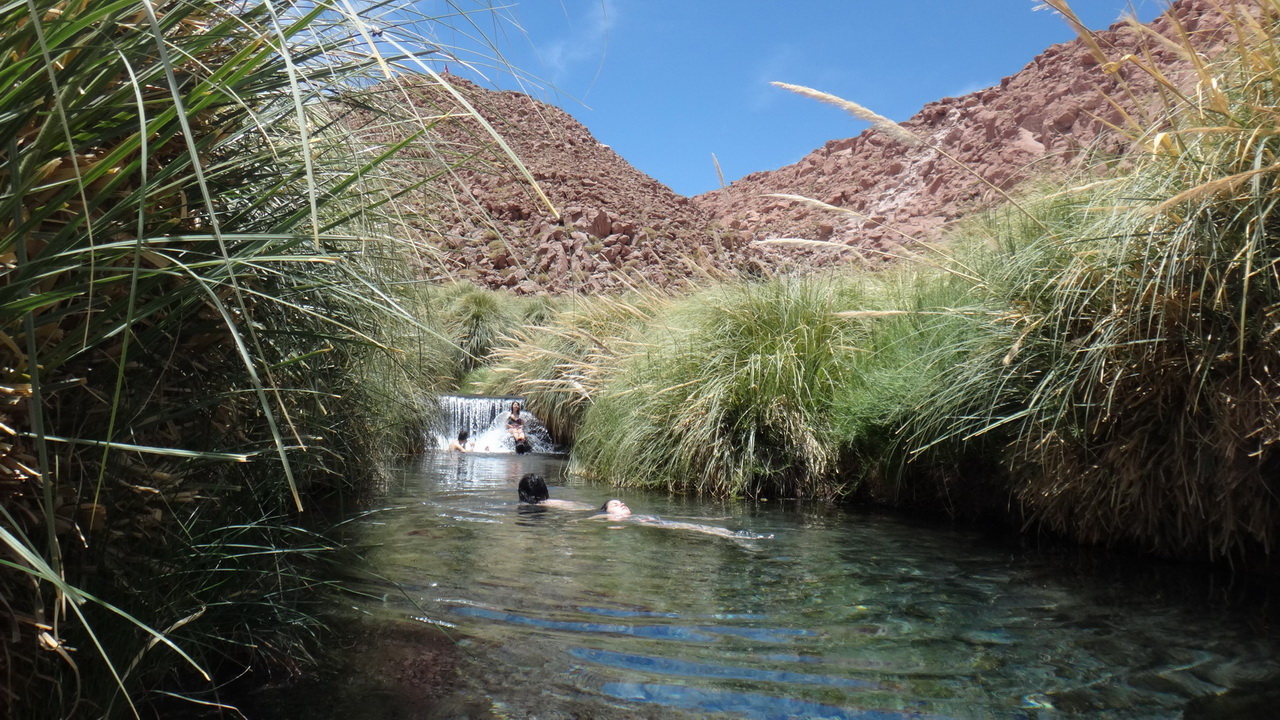 ← 6/20 IF DANTE HAD KNOWN CALAMA, HELL WOULD BE LARGER AND A LITTLE MORE MISERABLE. 4/20 WE GO! 4 DAYS TO ORGANIZE THE TRANSFER OF THE TEAM FROM VALPARAISO TO CALAMA. →