3/8 – Airspace: The special IFR is a beautiful invention !

The day following my arrival in Buenos Aires, whereas I was going to look at the airport for my friend Mattanò, experienced glider pilot and ex 747 Captain at Aerolineas Argentina, we met by the pure lucks Lito Fentanes, president of the CADEA, the equivalent of our National Aero-Club, who dragged us into a meeting with the military person responsible of the air-traffic and the chief of the controllers of the region Centro, of which depends Bariloche and San Martin de los Andes. To our biggest surprise these people detained a complete file on Klaus and me, perfectly knew all our activities and were very happy to be able to debate first their problems and a little of ours with one the concerned persons (not to say guilty). At the end of three hours of discussions not always easy, we left with a principle of agreement that got materialized by a fax copying the demand of the CADEA precisely, we are allowed to fly above level 195 for the whole season, on demand of the pilot until FL 280 in all controlled airspaces and therefore with IFR flight plan in VMC conditions with the same constraints that the previous years:

The group of pilots flying at Chos Mallal has also been favoured since they will fly until FL 350 without any constraint, no radio nor transponder, but enclosed in a volume around the airport (all is relative, this volume is as big as the LTA French Alps) and without penetrating the airways.

Some days later I was called in emergency by the controller of Mendoza who, not having understood the content of the telefax , believed to manage a multitude of gliders in the airways between Ushuaia and Mendoza until FL350! I understood her concern and it was easy to me to reassure her, especially since this year we were only two gliders. The caprices of the weather having never allowed us to arrive until the TMA of Mendoza, this kind lady risks to take the glider pilots for madmen!

This concept of flight special IFR above FL195 in visual conditions is especially interesting, securing for the controllers and the airliners, and don’t present any particular difficulties for trained pilots flying in two-seater under the condition:

This protocol perfectly functioned with the controllers of the region Centro (being physically at Buenos Aires) and managing the airspace going from 200 km to the south to 400 km to the north, on the whole width of Argentina. The quality of the communications radio is good on the whole zone and even though we lose contact with Buenos Aires, the controllers of the local towers are always available to make the relay.

The reports were a lot more complex with the region South, of Comodoro Rivadavia. First of all a feeling of rivalry exists between the South and the North; as at the world those of the North consider those of the South everywhere as southern with a small feeling of contempt or inferiority, that those of the South render to them well as while putting forward their independence until the limit of their rights and sometimes even beyond. And as arrangements concerning us had been emanated by those of the North without dialogue with the “Southern”, everything that could be made legally to put us sticks in the wheels was applied systematically. As for example to impose us a vertical separation of 10.000 feet with an airliner, whereas 1.000 would have been sufficient, to pretend not to understand radio message, even relayed by the airliner, to affirm that our IFR FPL was not transmitted to them, in brief, that was not always easy. But as we were never hurried by the time us took the things with philosophy and transmitted our impressions to the right person in Buenos Aires upon our return.

The next season should be different since by decree of the precedent President of the republic (the husband of the present President), all the commercial aviation and its control have been transferred to a new administration for the civil aviation, ANAC, that took its functions July 1st 2009. It is unfortunately not certain that a civil control is an advantage for us on the medium-term. 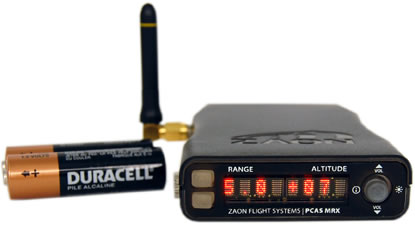 This year I had installed a PCAS Portable Collision Avoidance System, the Zaon MRX, that indicates the distance (until 5 nm) and the relative altitude of all airplanes possessing a TCAS or a transponder answering a radar. This device, smaller than a Flarm, can function on its own batteries. More of info to the http://www.delta-omega.com/desktopdefault.aspx?panelid=70&tabindex=1&tabid=188 .

We never had to use it for managing conflicts but could verify the presence of planes of which we knew the existence. The maximal distance of 5 nm appears however to me a little weak to manage a conflict with an airliner arriving facing you since the pilot hardly has only 30 seconds to clear before the collision! It is indeed very little. This basic model (470 €) doesn’t give the azimuth of the near traffics, it is necessary to use the XRX model (1.700 € and a cockpit immune of parasitic magnetic fields) to have all infos. That begins to be expensive, especially since the Flarm, useless in general aviation, remains inescapable and therefore necessary for the separation with the gliders only. But the safety doesn’t have a price. In Europe, there are more light planes in flight than gliders, their pilots are less accustomed than we to watch outside, especially since they are in general in contact with a controller who gives them the information of known traffic, the gliders being, apart few exceptions, unknown. I can only recommend this supplementary, completely portable and autonomous tool.

The most meaningful anecdote of the good collaboration of the controllers of the region Centro could be our exit of the TMA by the south with an IFR flight plan between the levels 130 and 230. We had to pass via the point TORRES, located 35 nm south and in full middle of the airway coming from Ushuaia. In front of us the Southern flight from Ushuaia is at FL300 at 100 nm from the south and ask the authorization to descend to the level 100 at TORRES. The conflict is obvious and the controller of Bariloche asks him to delay his descent. The airline pilot begins to protest against the presence of gliders in the airway, but the controller answers to him that we are under IFR flight plan and that she decides. This gentleman insists ejecting of the airway, the controller answers quietly that if he wants, he is allowed to change to VFR, to leave the airway and to descend at his discretion. What he declines politely, we won’t hear him any more except when he asks ironically for the position of “El Señor del planeador.”

The most meaningful anecdote of the bad collaboration with the controllers of the region South could be the imposition of a separation of 10.000 ft with an airline plane that had already passed the point and was heading northbound whereas we went southbound. Probably this controller had not ever managed in her life an airliner and a glider in the same airway nor had the least idea of what means 40 nm to the South of one point with a South route (us) and the vertical of this same point with a North route (the airline). All my attempts of explanations remained vain until the moment where the pilot of the airline took the initiative to convince the controller of Comodoro while saying that he had seen us (probably in the TCAS) and that the conflict was solved.

Ever had no worry, on the contrary, with the captains of the company LAN (Chilean property), of which the person responsible for the safety is a glider pilot, and that imposes to strictly follow the published documents of which we have copy on board.