This year, I had the chance to use a 15m Ventus 2C, ballasted with glycol up to 48 kg/m2, exactly as my two-seater Nimbus 4DM. This allowed me to verify a hypothesis that I had strongly suspected for a long time, now demonstrated before an official and interested observer (Michel Fache who also owns a Ventus CT): under record attempt conditions, these two machines have equivalent performances. Conclusion: the 15m class for records is not justified. 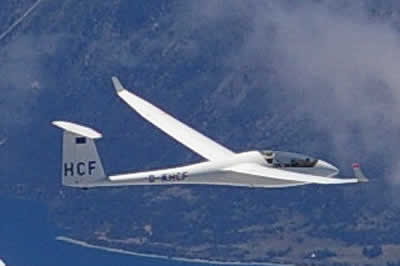 Before shouting “scandal”, please follow my reasoning right to the end.

From a theoretical point of view, this result is obvious while comparing the L/D curves for equivalent wing loading. In the figure below, we have superimposed the L/D of gliders having more than 10 years from 15 to 30 meters wing span, all at the same wing loading. One needs to remember that the single seater can be loaded up to 53 kg/m2 whereas the two-seater is limited to around 47 kg/m2, giving the 15m a further advantage of 6% on the speed and 2 points L/D at 170 km/h. Furthermore, it has to be noticed that these curves have been drawn on the basis of data taken from the flight manual (usually overestimated) for all of them except the Ventus, whereas the one for the Ventus comes from flight tests carried out by Idaflieg, therefore true.

What can be seen? Above about 170 km/h, the advantage of the open class seems to be around 5 points L/D. This result has to be reduced taking into account what said above regarding the accuracy of the data. What remains? ZERO! We verified this during two long flights, one of which being an out and return of 1.000 km (4 national records), same as my world record of last year, almost in patrol with my Nimbus 4DM flown by Michel and the Stemme flown by Pierre-Alain. It was absolutely impossible to clearly see any advantage for the big wings. Only the decisions of the pilot could make a difference. 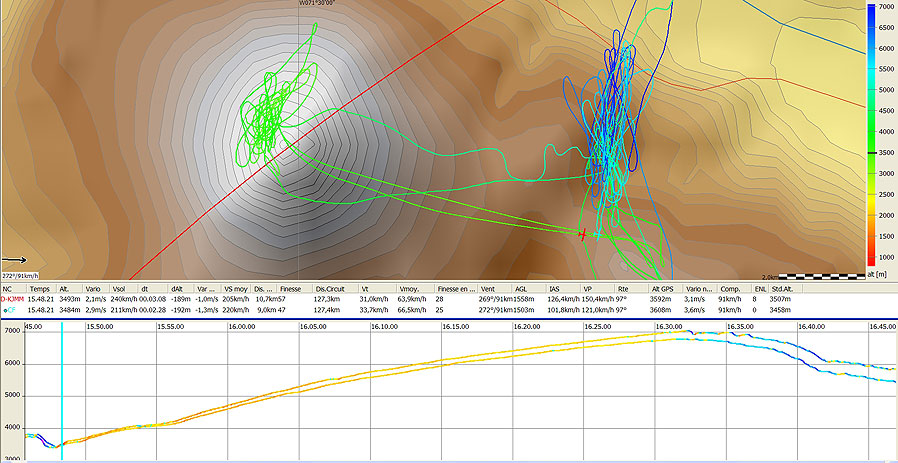 And during climbing? Yes, a difference certainly exists, although in the conditions of record, the time spent “stopped for climbing” is very short, if any (it was zero last year during my world record at 203 km/h). In order to put a figure on this “handicap”, we flew a “patrol climb” again with the Nimbus 4DM in the very classical wave of the volcano Lanin (figure), between 4.000m and 7.000 m., all parameters being identical. IGC Files here. Result:

This means that to achieve the same gain of altitude of 2.869m that the Nimbus, the Ventus would have flown 2 min 15s more, for a total of 38 min. It is indeed very little.

What does that mean in case of a world record of 15 hours, for example the one of the 1.500 km triangle, during which the Nimbus stopped for a the total of 78 minutes for a gain of altitude of 10.431m, giving an average Vz of 2,152 m/s? The Ventus would have had a lower Vz of 2,152 – 0,077= 2,075 m/s, resulting in an increase of the climbing time of only 3 minutes for the same gain of altitude of 10.431m! Since the straight line performance at the speeds of this type of flight is not significantly different, it seems to me that 3 more minutes on 15 hours of flight cannot justify a separate class of record.

With that, I don’t want to say that the 15m class has no reason to exist, it is absolutely justified in contests, where one can be forced to fly even under rain or to remain in flight in 0,1 m/s while waiting for better conditions. I did it and I strongly agree. And when there is no more lift and one uses the left part of the curve figure above, then yes, the difference is abyssal. But under the strong conditions of a record, especially a speed record, it is not necessary to draw the L/D curves at the Vne to understand that the 15m will be better than the open class! And again, the 15m gliders that I mentioned are “old”. No doubt that if I had used the data of the Ventus 2Cxa or of the Diana2 at 55 kg/m2, the big wings would show worse performances than these new 15m.

Can I hope that our IGC delegates will consider this aspect and file a proposal in that direction? The reduction of the number of records was on the agenda this year in Rome, nothing happened, here is a good opportunity to apply it on a rational basis!

P.S. What remains of the psycho-physical capacities of a pilot having spent 15 hours at -20°C (or even less) in the tiny cockpit of a Ventus-A or of a Diana-2, continuously negotiating clearances with the controllers, calculating estimates, elaborating route strategies, peeing, drinking, eating, monitoring the oxymeter and incidentally piloting? I don’t even know if this is feasible, no one has ever tried. That is the question! What a pleasure to comfortably rest and relax in the back seat of my Nimbus!