NB: every flight mentioned in this article is downloadable on our site as well as on Netcoupe with report of flight. http://www.netcoupe.net/Main.aspx

Whereas the main weather novelty of the past year was the abnormally south position of the anticyclone of the Pacific, whose centre was practically at the latitude of Bariloche, the novelty of the spring 2008 was that, in addition to maintaining the previous anomaly, the low pressure normally centred on the Atlantic to our latitude has been replaced by an high pressure that didn’t evolve practically during the whole season. According to my expert in meteorology, the likelier reason would be an increase of the surface temperature of the waters of the Atlantic between the 30th and the 40th°S latitude, what hardly convinces me because in Mediterranean this reason produces an opposite effect. No matter, this situation of blockage, sometimes even accentuated by an anticyclone on the continent, disturbed the regular circulation of the polar fronts that turned regularly. What didn’t prevent the formation of the cold fronts between these two anticyclones, creating a fast circulation with pause intervals of some days.

The fig. C1, TEMSI map of December 15 to the morning, represent the typical situation of the pressure centres and fronts (Bariloche is 41° latitude and 70° longitude, the local hour is UTC -3 whereas Europe is UTC + 1). It is difficult to imagine that with such a situation one can have, as we lived, 180 km/h of wind at 7.000 m! 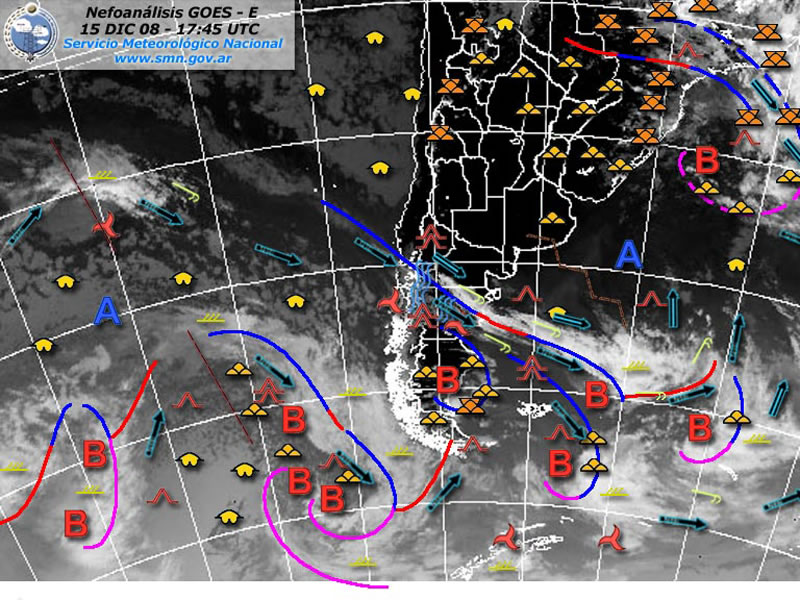 The fig. interprets the photo satellite and puts well in evidence the presence of a jet stream south of our position in an anticyclonic flow. Useless to hide my concern when, arrived at km 230, my good old Zander indicates me 177 km/h of wind of which 150 km/h headwind component to the way home! 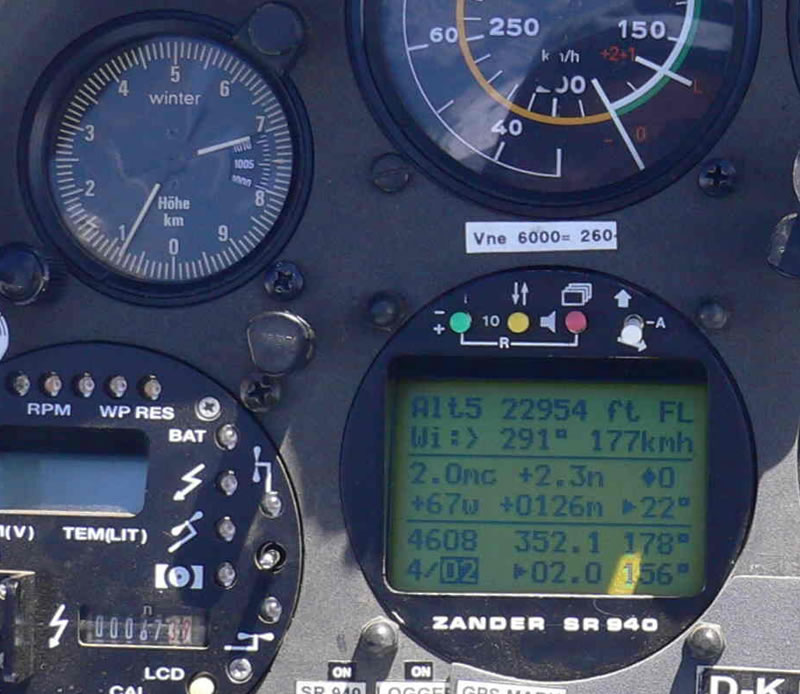 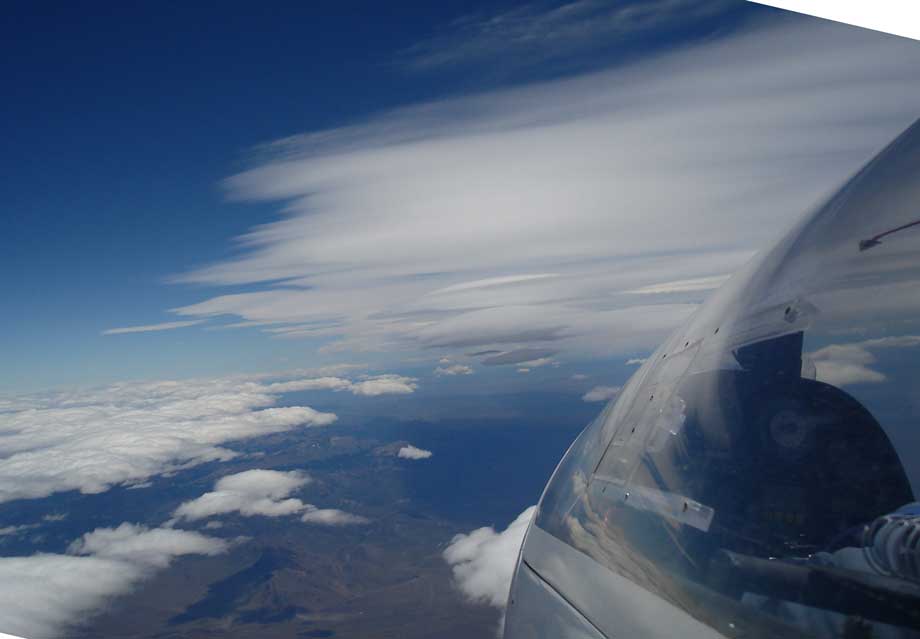 It is already 17h30 and the U turn seems me the most reasonable solution considering the uncertainties because I never flew with such a wind, my wind speed McCready ring compensation tables stops at 120 km/h headwind, and for this value it would be necessary already to fly with Mc +5 with a residual L/D of about 10. The return is going to be sporty! The discovery of the day will be that with such a wind the wave seems laminated and the Vz are rather weak, between 0,5 and 1m/s (at 170 km/h in stationary flight). Of the same way the wave length is enormous and it is necessary to fly in the plain, 34 km away from the usual track of the first rebound, very far away. The second discovery will be that making stationary flight against 170 km/h of wind is extremely difficult if one doesn’t have sophisticated tools like Zander or even better SeeYou Mobile in centering page with a scale of 2 nm. Indeed the least error of heading in relation to wind made you drift of several kilometres in few seconds and the return is highly painful! It will take 3h30 to fly these 230 km.

The positive side of the anomaly weather being that we could live the birth and the intense exploitation until the night of many magnificent hydraulic jumps (the one that I named Bidone’s Jump by analogy with the discovery of this hydraulic scientist of the XIXth century) and finally, not being submitted to the constraints of the chronometer, I had the immense luck to be able to verify two hypotheses: 1) the conversion of the kinetic energy into potential energy (or more precisely géopotential) does exist: we could see the wind falling from 60 to 1 km/h in few kilometres and 2) the front of the jump doesn’t have any relationship with the orography (often more than 30° with anti-clockwise rotation between the axis of the front the line of crest and easily penetrates 200 km into the plain until 50km upwind of the crest line). I could also verify that the leading edge of the cirrostratus ondulatus materializing the jump is not a continuous line like the one of a rebound wave lenticular, but a continuation of tongues, fingers, that makes it look like a gigantic comb. This last aspect appeared to me at the time of previous flights but I never had the possibility to touch these combs with my own wings (around 8.000 m). Now it’s done. This meteorological phenomenon deserves more that a paragraph in this article and I intend to deepen this survey more specifically in a next issue.

The verification of the first hypothesis took place January 5 on a triangle of 1.200 km achieved as foreseen, half south north half. Whereas in the half south wind was of about 100 km/h without materialization of high clouds, the beginning of the north half was characterized by a decrease of wind speed around 50 – 60 km/h to the north of Bariloche then 40 – 50 km/h to the north of San Martin. The reading of the sky makes itself then more complex, a hydraulic jump seemed to take birth: cirrostratus in formation from a very definite line, a pseudo leading edge, the cloudy cover intensifying downwind to the point that the plain is in the shade for hundreds of km.

The photo, shot around 18h at 5.500 m and 80 km south of Zapala while looking northbound, shows the existence of the two dynamic systems: the classic rotors of rebound wave (whitest at the lower level), a rotor not well defined, grey, apparently turning reverse in the middle of the picture, consequence of a negative wind gradient therefore testimony of a likely hydraulic jump, of the rebound lenticulars well identified with leading edge and side of trailing edge well defined and materialization of the sinusoid at the middle level, and finally the cover by cirrostratus of the Bidone’s jump to the higher level toward 8.000 – 10.000 m of which the leading edge has the shape of a comb composed of very narrow tongues, several kilometres long, without trailing edge, capable to spread until the Atlantic.

Downwind of the Sierra Catan Lil, I observe that wind falls to 10 then 1 km/h during several minutes Fig. C7, it is not a calculation error! 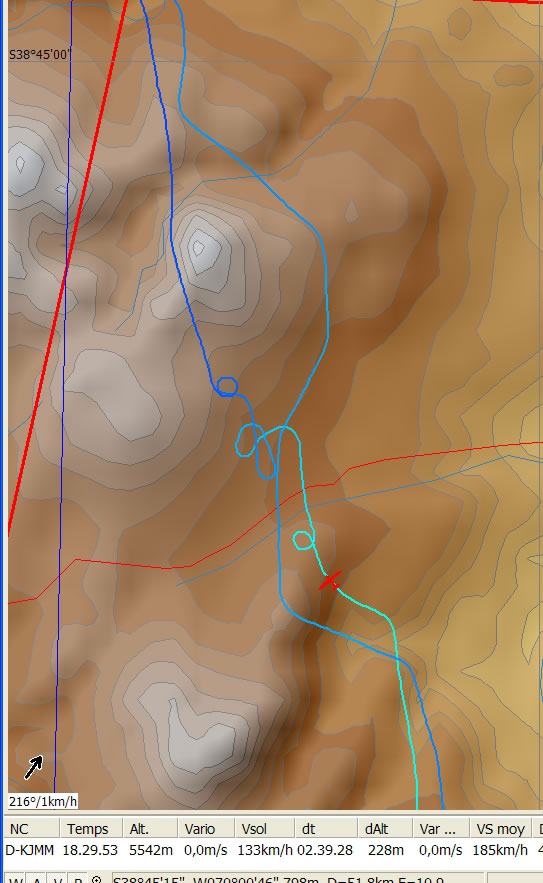 A fast research and the vario starts to move up. Superb, we found the heart of the hydraulic jump, where all the kinetic energy converts into energy (geo)potential energy, finally the proof that I waited for years! The rest of the flight in the front of the jump, with a wind of only 35 km/h is a delight for the eyes and a delirium for the mind, except that the turn point is 30 km downwind of the leading edge of the jump and making a vertical would mean to go from the paradise to the hell because the cloud collapses with probably rain and snow, that is not for me. 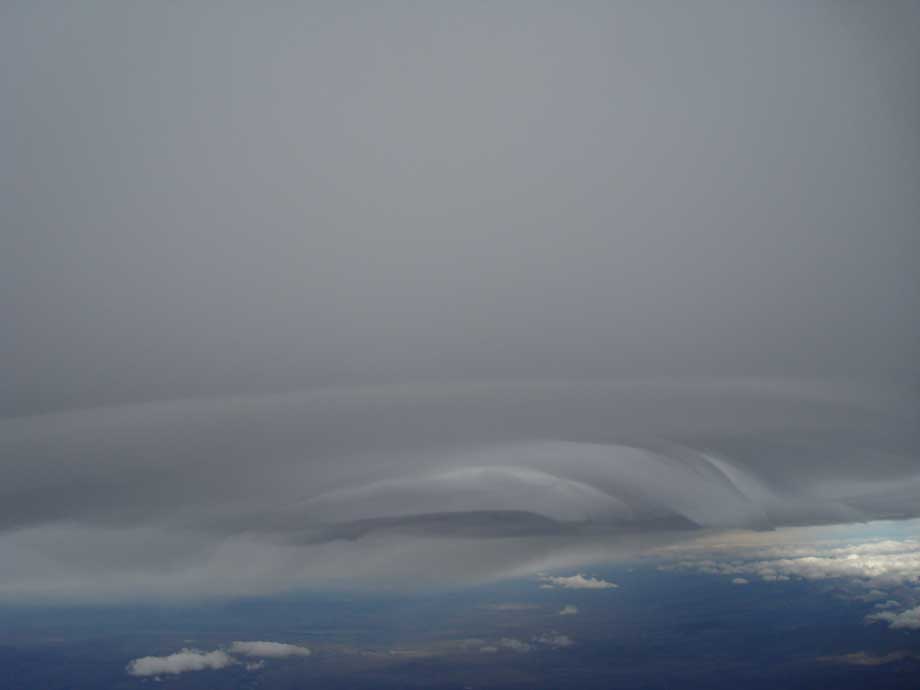 I take advantage of this point to verify the second hypothesis and I exploit the FAI rule that allows to turn practically beyond the point at any distance in a sector of 45°, passing to the vertical of the lake Caviahué, to the vertical of the chain of the Andes and therefore in a dynamic system that has no relationship downwind with the rebound. This hypothesis will be verified at the time of every flight in the  Bidone’s jump.

At the return, the cirrostratus of the jump thickened as far as swallowing the rebound lenticulars and the totality of the cloud collapsed toward the plain, see photo C5 taken around 19h35 at 7.000 m while looking at southbound cross Loncopuhé. 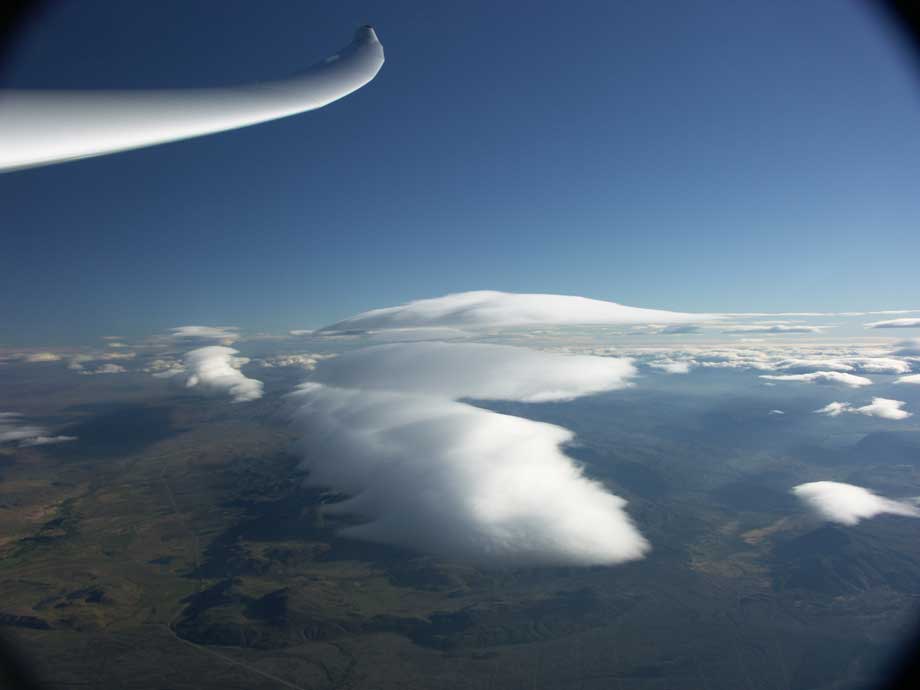 Another pleasant surprise was to be able to exploit some rebounds by winds of south sector to southwest (180 to 210°) oriented of 60 to 90° in relation to the axis of the chain that gives him birth. The photo C6 at 22h39 January 6 at 5.000 m shows a system of which we lived the formation in the quarter of hour preceding (the lenticulars are even translucent) triggered by the north tip of the Cordon de Esquel. These beautiful lennies are not positioned as usual downwind of the chain to the vertical of the road that one sees on the photo, but in full middle of the hole that separates this range from the one of Maiten. The wing is oriented voluntarily full South, wind is from 200° for 100 km/h. Certainly the Vz are not very high but these unusual conditions permit to make touristic flights of an extraordinary beauty inside the cordillera, or even in Chile, whereas under the conditions of record flights, the whole cordillera is therefore in the clouds and invisible. 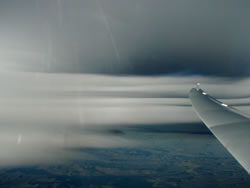 The apotheosis, the final bouquet of this season, was the evening of January 15, one day that had to be just good for the wave maiden flight of a French hang glider pilot of the first days (70’s), fishing guide in Bariloche. Takeoff around 16h local after coffee, classic course in surfing on the rolls until the km 300 to the south and it is while coming back close to Bariloche toward 20h loc. that we observe the formation of an absolutely monstrous Bidone’s jump and whose front spreads beyond the Lanin volcano, 200 km to the North. The declining sun generates the absolutely extraordinary colours, covering the whole palette of the rainbow since the orange red facing the sun, to the intense blue to the vertical while passing downwind by the black of the lenticulars. The controller having allowed us FL 280, I benefit from this to be going to photograph the famous tongues that characterize the leading edge of the jump. 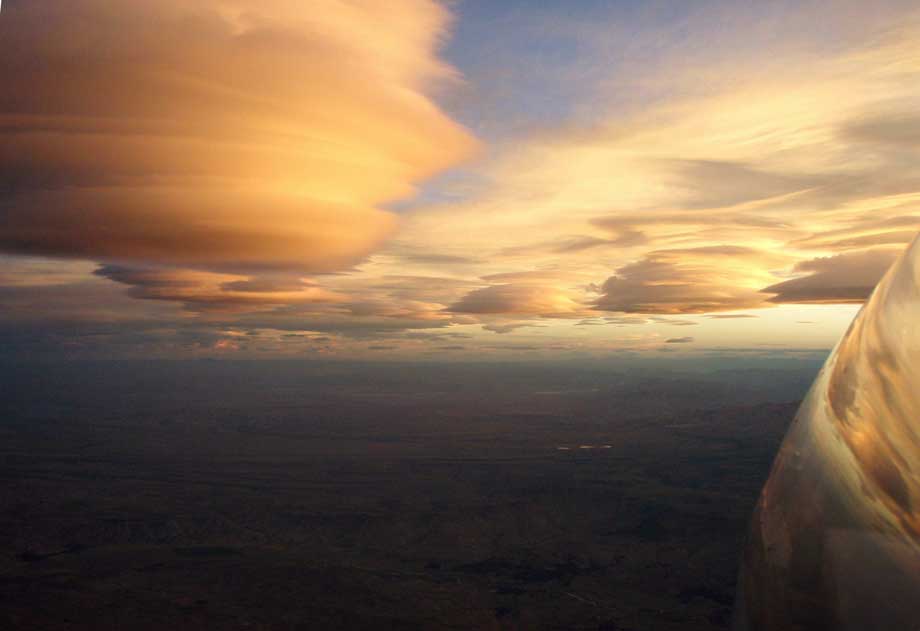 While the humans on the ground are in ecstasies in front of this phenomenon (photo X2 of the beginning of this article), I am afraid that the altitude and the spectacle made me lose the reason because I arrived at the end of the front close to the Lanin volcano at km 150 from Bariloche but 44 minutes before the aeronautic night, I left downwind during 30 km to make an experiment. I could have gone back to Bariloche effectively at more than 200 km/h average if I had remained in the front of the jump, as much this average was not more obtainable while jumping from lenticular to lenticular and besides the varios is weak. In few minutes I realize that I made an error, but these few minutes are of too much and will become at least fifteen if I persevere. Useless to take some risks while going back from night even though the thing was technically possible. I should have paid for the tax for the opening of the airport in extra hours, that would have made the maiden flight quite expensive! Klaus has just landed in Chapelco and reminds me that I have 10 minutes before the black night, the time to photograph the spectacle from our 5.000m and a dive to Chapelco where we land precisely in the minute of the night. Thanks to Klaus and his friends for their help!

← 6/8 - An argentinian cow difficult to digest. 4/8 - The engine behaved well but the surprises came from elsewhere. →