The cherry on the cake of the January 2008 flights was thermalling with hordes of condors: these are the young that practise flight school in groups of 5 to 10 with one or two adults who teach them the soaring manoeuvres and thermal centering.

We were lucky meeting Christian Höller and Diego Vallmitjana, local paraglider expert pilots and directors of a film that should be released shortly, describing the life and the flight characteristics of the Andean Condor. The trailer can be viewed in streaming or downloaded here. Extraordinary pictures not to be missed! 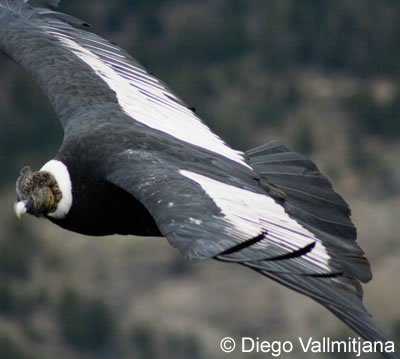 Christian showed great interest in our flights because, with his paraglider grounded on strong wind days, our narrations about the observations of the condors flying in the wave represented for him the missing link in the bird’s life cycle. Superimposing our trajectories in wave on those of the condors showed amazing resemblances. How can these birds know the point where the wave starts since they fly directly to it? Why do they fly so far and so high inside the mountains while, on the ground and in the plain, they eat carrion? Apparently, according to ornithologist Lorenzo Simpson, it must be just for pleasure, a genetic reminiscence of a characteristic acquired in the past (not so faraway, hardly two centuries) when the absence of herds (cows and sheep) forced them to travel long distances looking for food. The flight being only a means, not an end, which is no longer the case today, since the pampas provides them in abundance with all the carcasses they need (illness, accidents, predation, spells of cold weather, leftovers from the gauchos snacks, etc.). Take-off every morning for local breakfast near the Condorera (beside the pampas), then tens of miles are browsed every day before returning at evening to the same home. The Condorera is the place (in general cliffs full of cavities) where a colony of condors lives. It is a well-organized society with its rules and its hierarchies, except at mating time and while raising the chick, where the female lays a single egg (once every two years) directly on the ground, and then both parents raise their offspring there for over a year. The best known local Condorera, the Cerro La Buitrera, is only 10 km from the airport and accessible in a 4×4. An attended hut allows you to spend the night there to observe the birds closely at dawn and twilight, with up to 140 recorded individuals. This ridge is also a classic trigger point for wave and thermals, located beside the pampas, and surprisingly resembles the “penitents” of Saint Auban. Positively, there are too many resemblances between this bird and the soaring population!
The condor, the largest flying bird on our planet, with a wingspan of up to 10 feet and a weight of up to 25 pounds, capable of living up to 70 years, is a strongly gregarious creature and of very friendly appearance, rarely apprehensive (to the point that it doesn’t defend its nest), having surprisingly developed rules of social behaviour. Destitute of claws and pointed beak, it cannot attack and its character reflects this functional inability. After having passed 6 to 9 months in the nest (i.e. directly on the rock), fed by parents who mate for life , the chick is going to spend 9 additional months learning how to fly while still unable to feed itself, therefore always dependent of its parents. Yes, a condor needs nearly 18 months to become autonomous, and more than five years to become sexually mature. 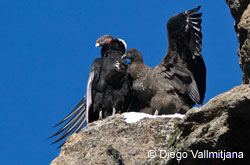 For that reason, the female lays an egg only every two years. And when the flying age arrives, the adults organize collective courses during which the instructors (not necessarily the parents) take a group of youngsters to work soaring for hours. And when a glider pilot is lucky enough to meet with this “heap of feathers”, it is a true treat to play with them. It is easy to distinguish among them, the young being uniformly brown (and remaining brown until fully mature) and have a “jerky”, poorly organized flight, flapping paws down, whereas the adults are black and white with a white flange around the neck, and have a majestic flight in an elegant and linear position. More details at the Smithsonian National Zoological Park.

The Cerro La Buitrera is characterized by thousands of holes which the condors use to rest. Contrary to common knowledge, the condor is the absolute opposite of a lonely and shy bird! It only asks for one thing: to be in good company and to fly for pleasure, high and far. As we, glider pilots, do!

Appointment next November to continue research using the glider. And hoping to discover even more secrets….